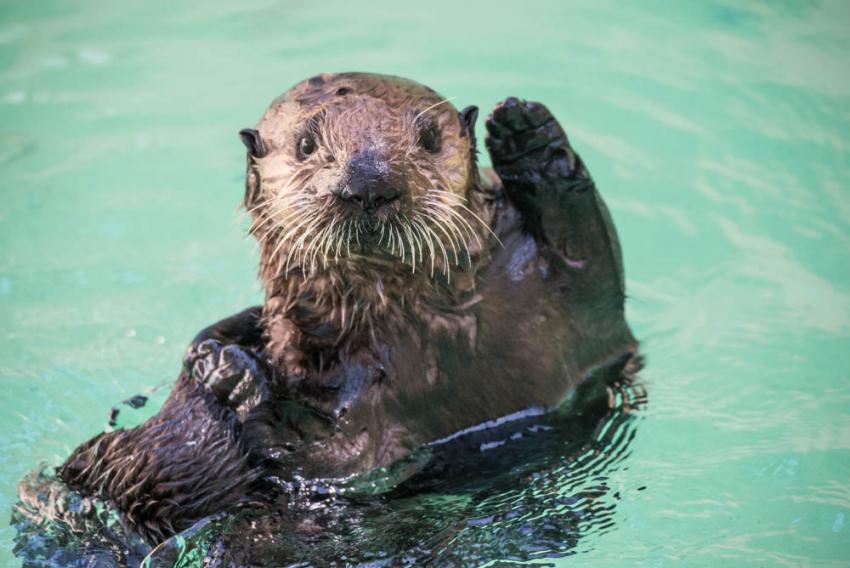 Precious cargo arrived Tuesday, May 13, on the Oregon coast in ice-filled crates, when a single-engine turboprop plane touched down at Newport Municipal Airport. Oswald and Juno, two sea otter pups bound for their new homes at Oregon Coast Aquarium and the Oregon Zoo, debarked from the plane along with a mammalogist and veterinarian in tow who cared for them during their journey from the Monterey Bay Aquarium.

Sea otters were historically abundant along the Oregon coast, but had been hunted to extinction by the turn of the 20th century. Aside from occasional visits by sea otters from Washington, the only full-time resident sea otters in Oregon are found at the Oregon Zoo and the Oregon Coast Aquarium.

Oswald and Juno were each discovered abandoned on beaches along California's coastline. Oswald stranded November 2013 and Juno two months later in January 2014. Staff with the Monterey Bay Aquarium's Sea Otter Research and Conservation program arranged for the rescue of the pups and their transport to Monterey. Sea otter program staff immediately began searching for homes for the pups, realizing there were no experienced otters available to rear the pups for release to the wild. Once homes were found for the young animals, they were both deemed non-releasable by the U.S. Fish & Wildlife Service.

"We're grateful for the support of the USFWS to help us find good homes for these young otters, and we appreciate the willingness of our partners to provide lifelong care to Oswald and Juno," said SORAC manager Andrew Johnson.

"We all work for the common good to place these animals that would not be able to survive in the wild," said Ken Lytwyn, curator of marine mammals for the Oregon Coast Aquarium. "Monterey Bay Aquarium rescues and rehabilitates these otters daily, and if release is not an option, organizations like the Oregon Zoo and Oregon Coast Aquarium take these animals and care for them for the rest of their lives."

Oswald and Juno are busy settling into their new homes behind the scenes. Once they each complete their respective quarantine periods, they will meet the other otters before making their public debuts this summer.

"Juno arrived Tuesday night and immediately began exploring," said Nicole Nicassio-Hiskey, the Oregon Zoo's senior marine life keeper. "Within 30 minutes, she was already grooming herself and eating, which is a great sign. She tried capelin for the first time and seemed to enjoy it. She's active, playful, curious — I can tell she's going to be a lot of fun."

Eventually, the zoo plans to introduce the youngster to its two geriatric sea otters, Thelma and Eddie — both of whom were also rescued in California as pups and deemed non-releasable. "It should be rejuvenating for our two older otters to meet this active youngster," Nicassio-Hiskey said. "We expect Juno will really keep them on their toes."

Oswald, then known as otter 649, earned notoriety for his juvenile antics as the sixth sea otter ever reared on exhibit at the Monterey Bay Aquarium. His companion, Gidget, taught him how to groom his coat, swim and dive. Oswald taught his companion the intensive art of caring for a sea otter pup. In time, Gidget will apply the teaching skills she learned with Oswald to show other stranded pups how to survive on their own before they are returned to the wild.