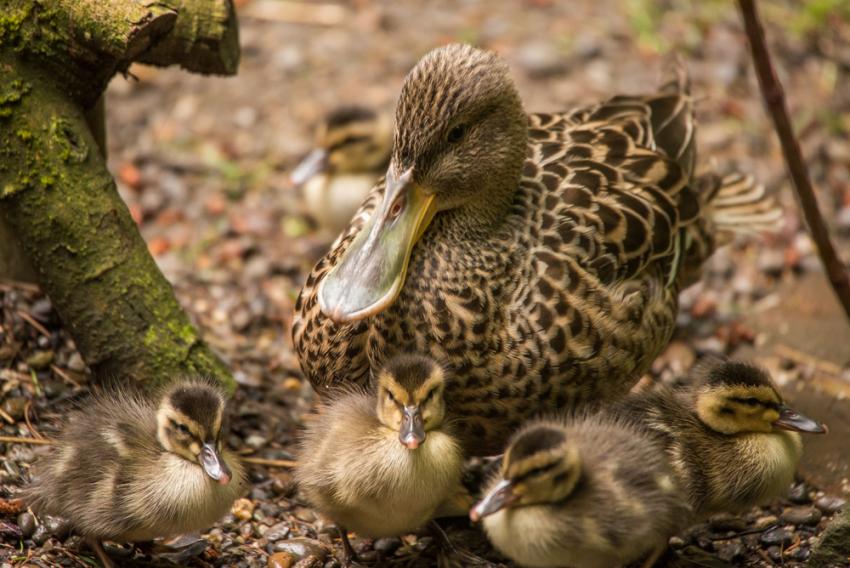 Six downy puffballs — aka northern shoveler ducklings — hatched at the Oregon Zoo on Sunday, and they're already stealing the hearts of visitors. The sextuplet can be found shadowing their mother around the zoo's Cascade Marsh Aviary.

"They are really doing well on the marsh," said Amy Cutting, animal curator for the zoo's North America section. "Mom is chasing away other ducks, and the other female shoveler is hovering nearby to help. After each dip in the pond, the ducklings return to land and all squeeze in under the safety of mom's wings. It's amazing how they can all fit under there."

Named for its huge spatula-shaped bill — among the largest of any waterfowl — the northern shoveler is widespread throughout the Northern Hemisphere.

"We have not hatched this species in my 12 years at the zoo, so it's very exciting for animal care staff," Cutting said. "Of course, it's nerve-wracking too, as ducklings are so vulnerable — that's why they produce so many. In the zoo environment, we are able to exclude predators like hawks, owls and raccoons — things that regularly take ducklings in the wild — but there are always risks when they are small. The fulvous ducks in the Africa swamp lagoon, where the flamingos live, have successfully raised eight ducklings this year, so we are very hopeful."

According to Cutting, another clutch of fertile eggs in the marsh, this one belonging to a green-winged teal, may lead to more ducklings — and more nail biting — in the coming weeks.

Metro, the regional government that manages the Oregon Zoo, has preserved and restored more than 90 miles of river and stream banks in the region through its voter-supported natural area programs. By protecting water quality and habitat, these programs are helping to provide the healthy ecosystems needed for waterfowl, fish and other wildlife to thrive. Both northern shovelers and green-winged teals can frequently be spotted in Portland's Smith and Bybee Wetlands.