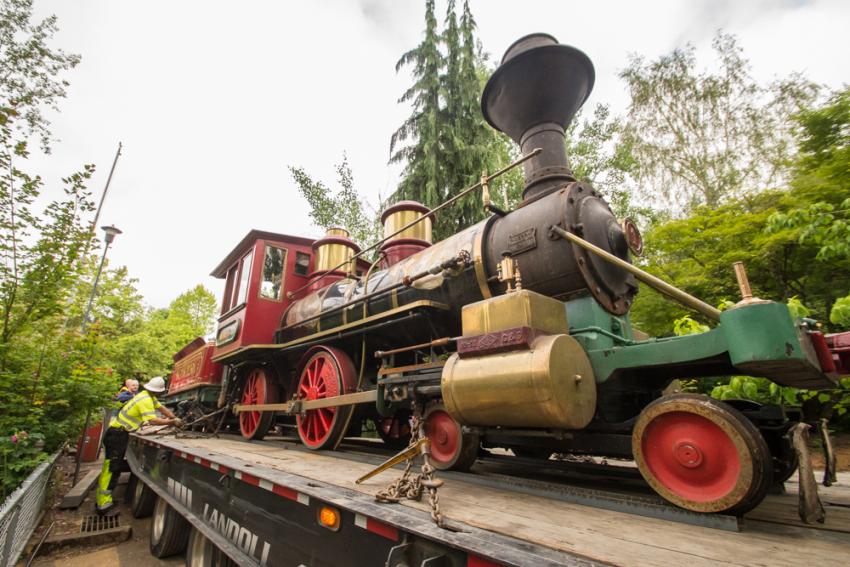 Two of the Oregon Zoo's historic train cars made their longest trips in half a decade this week. The Old West–inspired Centennial steam locomotive and the sleek, retro-modern Zooliner were transported by flatbed truck to Pacific Power Group's Ridgefield, Wash., headquarters Monday for repairs and refurbishing.

Over the summer, Pacific Power's engine experts will test the Centennial's pressure vessel, install a new smoke box and replace the steel-frame carriage on the locomotive's tender car. The Zooliner will be getting a new diesel engine with advanced emissions-control technology. Both trains will also receive custom paintwork to spruce them up while retaining their historic attributes.

The railway's third locomotive, the Oregon Express, remains at the zoo, though it is not currently running. All three trains were temporarily taken out of service last September, as crews began laying track for a new train route designed to provide unique views of animals as well as improved looks at ZooLights, the annual winter lights display.

"We're privileged to run one of the most beloved railways in the Northwest," said Teri Dresler, acting zoo director. "The work we're doing now will build on that rich history and take this community zoo into the future with some entirely new viewing opportunities."

The new railway route is part of a monumental, decade-long renovation at the zoo that is carefully phasing in all the projects funded by the community-supported zoo bond measure. Rerouting the train was necessary to provide space for a service road and the expansive new Elephant Lands habitat. The new train route — expected to debut in time for ZooLights this fall — will circle an elevated trestle in the forest north of Elephant Lands, offering views of Portland's famous pachyderms in the spacious North Meadow section of their new habitat.

"The zoo has grown significantly since the railway opened in the 1950s," said Heidi Rahn, who oversees all the projects funded by the bond measure. "Now we get to write the next chapter in our 125-year history with a train that gives visitors an amazing experience and a zoo that gives animals the great habitats they deserve."

"We are honored to have been selected to take on this special project for the Oregon Zoo," said Mark Dawkins, Pacific Power Group CEO. "This project allows us to utilize the expertise from multiple divisions of our organization to ensure the power upgrades and restoration exceed expectations."

The zoo's 30-inch-gauge railway line evolved out of plans for a children's train when the zoo moved to its current site in the late 1950s. Both the Centennial and the Zooliner were featured during Oregon's 1959 centennial celebration. A photo from that time shows then-Sen. John F. Kennedy stepping off the train during a staged wild-west train robbery.

The Centennial steam train is modeled after the Virginia & Truckee Railroad's famous Reno locomotive, which was built in 1872 and has been featured in more than 100 films, including How the West Was Won and Cecil B. Demille's Union Pacific. The Zooliner is a scale replica of General Motors' futuristic Aerotrain, which debuted in the mid-1950s. Its name is a nod to the Viewliner, a similar Aerotrain replica that was one of Disneyland's main attractions during 1957 and '58.