Walls go up for largest building in zoo history 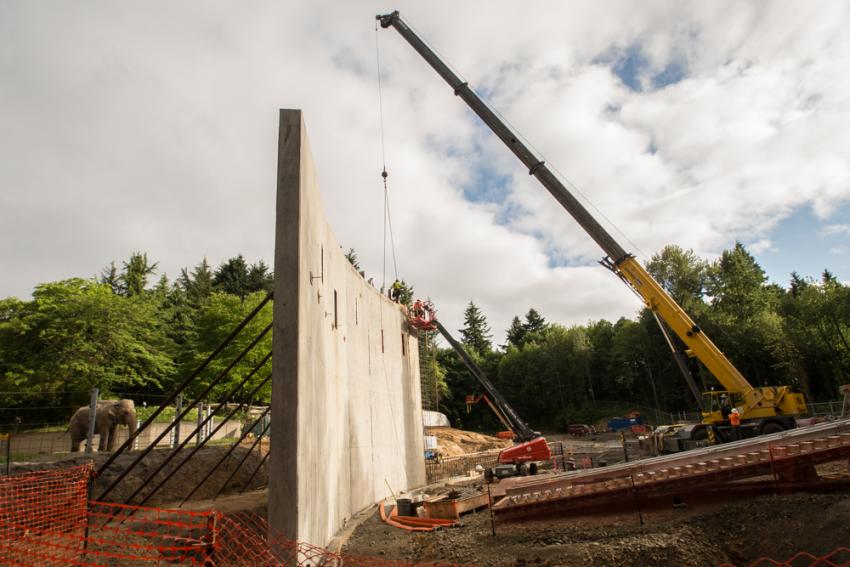 With the arrival of Tusko in 2005, keepers at the Oregon Zoo figured the dated, Eisenhower-era indoor portion of the zoo's elephant habitat would be put to the test. And indeed, it didn't take long before the inquisitive 13,000-pound bull elephant, one of the largest in the country, began exploring every inch of that facility. In one of the rooms, Tusko soon realized that by standing on his hind legs, with front legs atop a hay feeder, he could reach up with his trunk and knock holes in the ceiling. That ceiling was 21 feet up.

Elephants, which are adapted to stand on their hind legs and stretch their trunks to pull down treetop vegetation, can have up to a 24-foot vertical reach — similar to, and sometimes even greater than, that of giraffes. That reach requires all indoor elephant spaces to be at least two stories high.

Construction crews reached a turning point on Elephant Lands today as the most challenging tall walls of the new indoor holding area were completed. With its solid 35-foot-tall walls, this section of the indoor habitat is now the largest building in the zoo's 125-year history, but it won't hold that record for long. This week, crews will begin raising the even larger Forest Hall portion of the habitat.

"We've turned a major corner," said zoo bond project engineer Wayne Starkey. "A lot of construction is behind the scenes, and people don't often get to see the progress we're making until a habitat is complete. With the walls up, you can now understand the scale of this project. This is the most ambitious stage of the most ambitious project in the zoo's history."

The 14,000-square-foot holding area — with three 1,600-square-foot stalls for elephant care — will replace the zoo's current holding area, which dates to 1959. Together with Forest Hall, the two indoor spaces will sit on 32,000 square feet, with a roof reaching up to 43 feet at its highest point.

Both indoor spaces will be filled at least four feet deep with sand to cushion and protect the elephants' feet. Maintaining healthy feet among elephants is one of the most important tasks for animal-care staff. And — as with most things elephant-related — it is an area in which the Oregon Zoo has led the way. 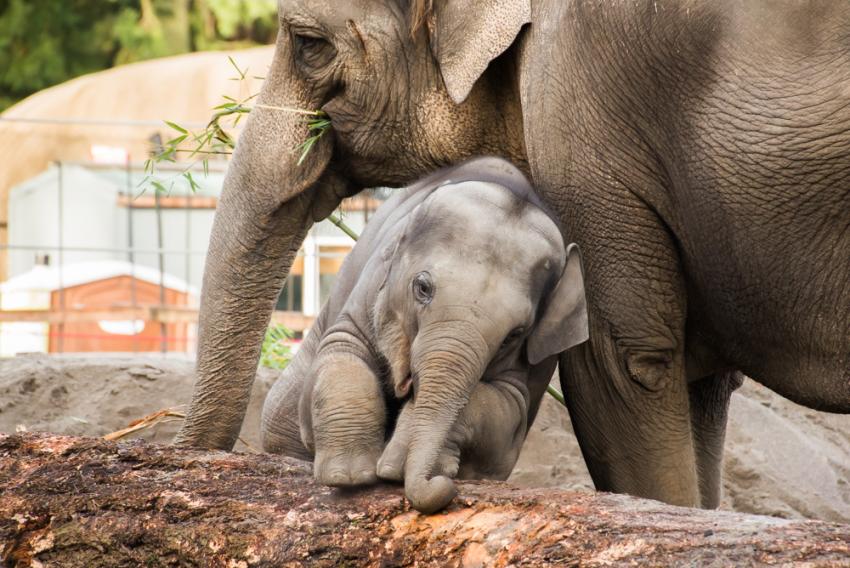 Older exhibits, particularly those constructed in the 1950s and '60s, featured a lot of concrete, which is easy to clean and disinfect but can lead to foot problems in elephants. The Oregon Zoo pioneered the installation of elephant-friendly surfaces in the early 1990s and 2000s, retrofitting its facilities with natural substrates outdoors and 2-inch-thick rubber flooring inside. In 1998, the zoo hosted the first professional conference on elephant foot-care practices, convening veterinarians and elephant experts from around the world.

"We've learned a lot about caring for elephants since the 1950s," said Bob Lee, the zoo's elephant curator. "And we're grateful for the chance to put all that knowledge into this new habitat, which is going to make the lives of all the elephants so much better."

An elephant-sized "air curtain" separating Forest Hall from the outdoor areas will maintain a constant, comfortable indoor temperature for pachyderms and visitors while providing the herd around-the-clock access to the rest of Elephant Lands' 6.25-acre spread.

"The great thing about this feature is that the elephants get to choose whether to be indoors or out," Lee said. "It won't be us making decisions for them."

While it won't be readily apparent to visitors, the structure's rooftop will feature a huge array of solar panels as well as an 8,600-square-foot green-roof system designed to save energy, decrease stormwater runoff and absorb carbon dioxide.

Elephant Lands — the fourth of eight major projects funded by the community supported zoo bond measure — will be four times larger than the zoo's current elephant habitat, extending around most of the zoo's eastern end, from south of the concert lawn north into the area that formerly housed Elk Meadow. The entire habitat will be completed in fall of 2015.