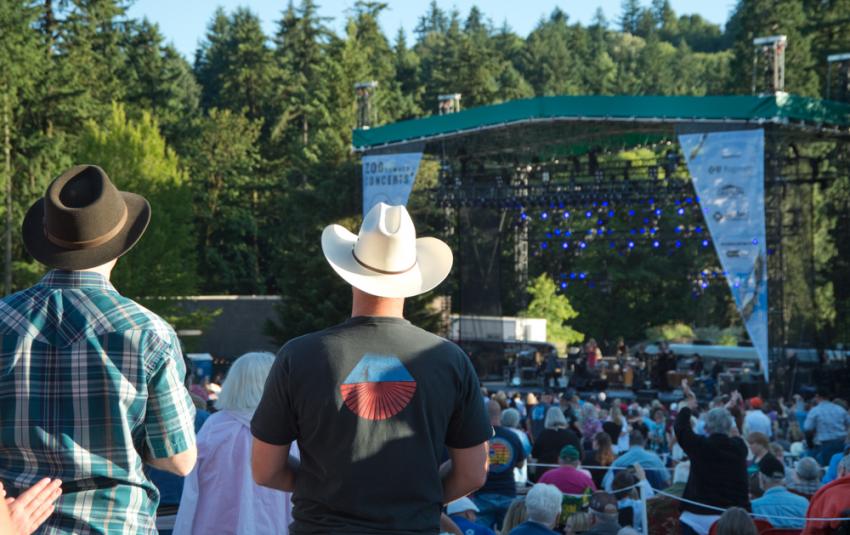 Music fans will notice two big improvements on the Oregon Zoo concert lawn this year: better views of the performers onstage and some amazing pre-show looks at the zoo's famous family of elephants.

The zoo's 2014 summer concert series — presented by Regence BlueCross BlueShield of Oregon, the Oregon College Savings Plan and Banfield Pet Hospital — features a new stage with better production and sightlines, more bleachers (closer to the stage) and new concession areas. But the modernization, which brings the zoo in line with the best concert venues in the country, began with the elephants.

Elephant Lands — the fourth of eight major projects funded by the community-supported 2008 zoo bond measure — is a sweeping expansion of the zoo's Asian elephant habitat that will quadruple the animals' space and dramatically enhance their daily experiences. Work on the new habitat has been carefully sequenced to gradually expand the elephants' accessible space in phases, and the recently completed Encounter Habitat often gives concertgoers a chance to watch the elephant family play, eat and hang out before the show starts. It was one of the first things music fans noticed when they arrived June 21 to see Merle Haggard.

The other was the stage and roof canopy. The 40-by-60-foot stage is roomier for performers than the previous concert band shell, which also limited both in-house and touring production. The new stage was manufactured by StageRight, based in Michigan, with a ground-support system and canopy from the Knoxville, Tenn.-based Tomcat. Both were installed by Stages Northwest, a local firm.

"Due to construction of AfriCafe decades ago, the band shell was off-center and limited guest sightlines," said Craig Stroud, the zoo's deputy director of operations.

That's all been fixed. The new stage opens sightlines that were previously blocked. And where the old band shell enveloped performers, the new arrangement invites the zoo's natural surroundings to the show. Behind the stage, lush foliage catches the evening light. Above the stage, new lighting is suspended from a state-of-the-art truss and canopy system — lighting that is easily swapped out when a touring production rolls in, as happened when Matt Nathanson and Gavin DeGraw played the season's second show June 27.

"The new stage and canopy allow the zoo to present the level of artist our guests want to see," Stroud said. "Those artists bring with them very specific equipment and production expectations."

In a competitive summer concert environment, that matters.

Not all of this year's changes have to do with the stage. Elephant Lands construction has also cut into the back of the concert lawn, where construction is now underway on a 160,000-gallon pool for pachyderms that will be 80 feet wide and 12 feet deep. To accommodate for that temporary impact, bleachers have been added, and the benefit is easy to see: It's easier to see. The bleachers create a friendly venue feel, and there isn't a seat more than 230 feet from the stage. Seat cushions with backs will be available starting with Rodney Atkins' July 10 show.

Future plans include improved food and beverage locations, modifications to the AfriCafe, a new plaza and an expanded lawn — all complete by the start of the 2016 concert season.

To purchase tickets or find more information (including show times and a full schedule), visit zooconcerts.com.