Hakuna Matata, an African pygmy hedgehog at the Oregon Zoo, gave birth to a litter of five on July 7, and this week the zoo was able to get some video of the prickly 3-week-olds. The tiny, spiny hoglets weigh just a tenth of a pound each, and when curled up in a ball they are about the size of a doughnut hole.

Keepers aren't completely sure of the little ones' genders yet, but they believe there are three males and two females. Two of the hoglets resemble their mother, a black-eyed cinnicot with mostly white spines; the other three take after their father, Burundi, who is a dark gray. Their quills are actually modified hairs, which fall out and grow back throughout their lives. 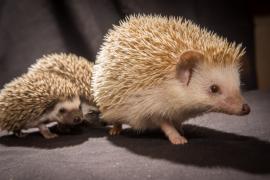 "When we think of African predators, we often think of lions and cheetahs and painted dogs," said Tanya Paul, who supervises the zoo's education ambassador animals. "But African pygmy hedgehogs are a great example of a smaller predator that is also important. They are insectivores, so they help keep bug populations down. They can also tolerate a fair amount of toxins in their diet, and sometimes will even feast on scorpions."

For now the hoglets are not viewable by visitors, but Paul says staff are working on ways to let people see them once the babies are about six weeks old and have been weaned. Some of the zoo's adult hedgehogs can be seen now at the Family Farm exhibit most days between 9 a.m. and 3:30 p.m., "hedgehogs permitting."

Although hedgehogs are cute, Paul warns, people should think twice — and even three times — before considering one as a pet.

"They're very difficult to care for because of their diet and the need for special veterinary care," she said. "Many vets don't specialize in treating exotic animals like a hedgehog."