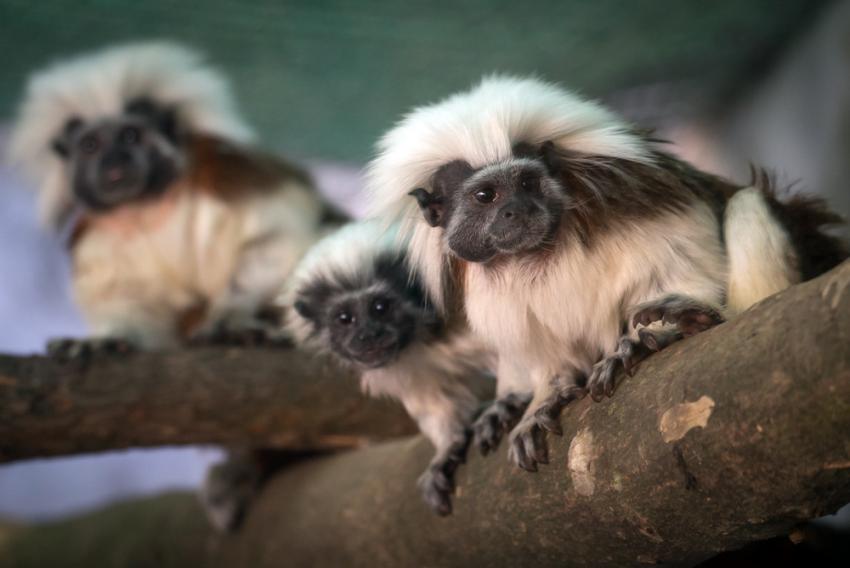 Three siblings, including a 4-month-old, are active and curious, keepers report

"We've been spending a lot of time watching the cotton-tops, making small adjustments to their home to make it as comfortable as can be," said Asaba Mukobi, the zoo's senior primate keeper.

Mukobi said the zoo's keepers and gardeners completely renovated the tamarins' new space before the cotton-tops moved in earlier this month. The habitat includes three indoor areas filled with plants and vines, as well as an off-exhibit rooftop area where the monkeys can spend time outdoors.

"They've been settling in really well, jumping from branch to branch to explore," Mukobi said. "And it's clear they've gotten used to all the attention. They will even come down to pluck a grape out of my fingers."

Mukobi said he and the other primate keepers conduct daily training sessions with all the animals in their care, and they have already begun working with the tamarins to encourage the monkeys' participation in routine weight checks and other health assessments.

In contrast to their 150-pound chimp neighbors, tamarins weigh only about 14 ounces — about the size of a squirrel — making them the smallest primates at the zoo.

Cotton-top tamarins are considered critically endangered in their native Colombia, where an estimated 75 percent of their original habitat has been destroyed over the past 20 years. The remaining population of roughly 6,000 cotton-tops is threatened by continued deforestation, even in protected areas. Since 1985, Columbia-based Proyecto Tití has worked to protect the species through field research, education and community programs.