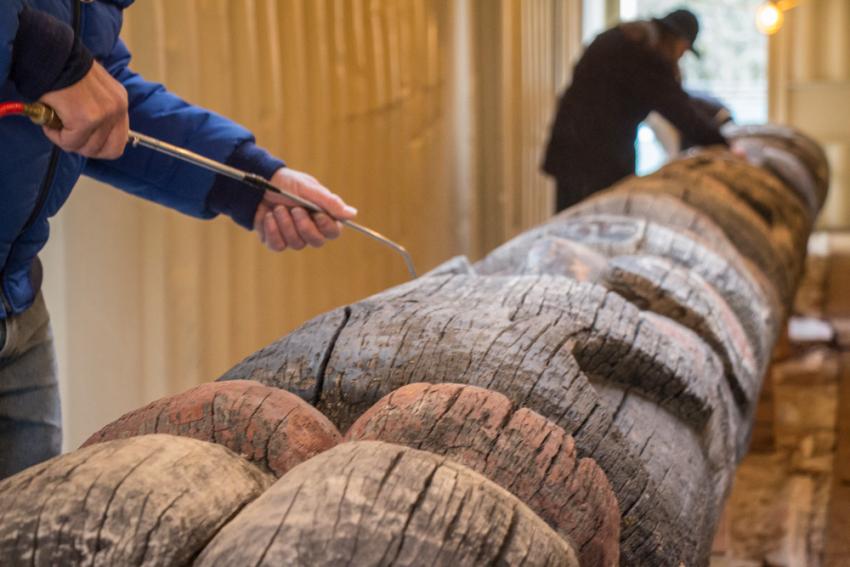 The totem poles — one crafted by Chief Don "Lelooska" Smith and another by father-and-son artists Rex and Ray Losey — have been on the zoo campus for decades, becoming familiar visual cues for visitors over the years.

They were relocated as the zoo began a major transformation last year, breaking ground on both Condors of the Columbia, which opened in May, and the new Elephant Lands — a sweeping expansion of the zoo's Asian elephant habitat that will quadruple the animals' space and dramatically enhance their daily experiences. 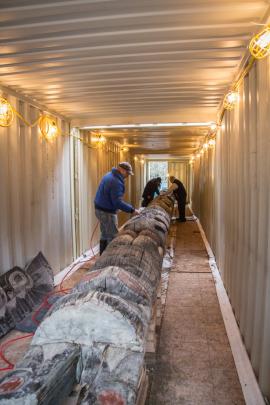 The totem poles were previously located near the zoo concert lawn and will be reinstalled at new locations in late September — the Lelooska work along the path across from the mountain goat habitat, the Losey totem pole just off the visitor pathway between the viewing area for cougars and black bears.

Lelooska's Northwest coastal style totem pole — 50 feet tall and 42 inches in diameter — was carved from cedar during a 14-day period at the 1959 Oregon Centennial Exposition. The work honors Oregonian soldiers who participated in Operation Deep Freeze, a famous multinational series of exploratory missions to Antarctica during the late 1950s. It was installed on zoo grounds in 1960 and is now on the National Register of Historic Places as well as catalogued in the Smithsonian American Art Museum database.

Since being moved, Lelooska's work has been stored on zoo grounds in a 60-foot-long, 8-foot-wide custom container. Lelooska died in 1996, so his brother, Chief Fearon "Tsungani" Smith, is leading restoration efforts, repairing cracks and rot, as well as painting, cleaning and detailing the carving. Zoo volunteers are assisting with some restoration activities, and the Lelooska Foundation, based in Ariel, Wash., is overseeing the entire effort.
Born in California, Lelooska moved to Hubbard, Ore., in the 1930s. According to the Seattle Times, he was an exceptional carver who crafted more than 100 totem poles and many more masks in his career. He even made totem identical to the zoo piece (though slightly shorter for transport reasons), which now rests at the entrance of the airport in Christchurch, New Zealand, the city where Operation Deep Freeze was based.

The Losey totem pole, made in 1977, is 15 feet tall and about 16 to 20 inches in diameter. Carved by Rex Losey and his son Ray, the totem pole was initially made for the environmental nonprofit Greenpeace but was donated to the zoo and depicts the effects of environmental pollution on Northwest animals such as otters, bears, wolves and eagles.

Of the work, Ray Losey writes: "'Survival Totem' is a 'Story Pole' with a strong message regarding a certain sharing of the planet so that all creatures may live. The animals on this pole have all suffered from habitat or rapid industrial change."

Rex Losey also passed away some years ago, and Ray Losey has been overseeing the restoration process for the work he made with his father. Ray Losey is carving new wings, repairing split wood and rot, and also painting and refinishing the work offsite at his studio.

The Loseys are part of a tradition of Native American carvers who take extraordinary pride in their craft and its cultural legacy. Rex mentored his son in the techniques and traditions of carving. Ray now carries on his father's work — as well as the work of those before him — but with his own flourish and style.

Related links:
Learn more about the historic transformation happening at the Oregon Zoo