New cotton-top tamarins move in next to chimps 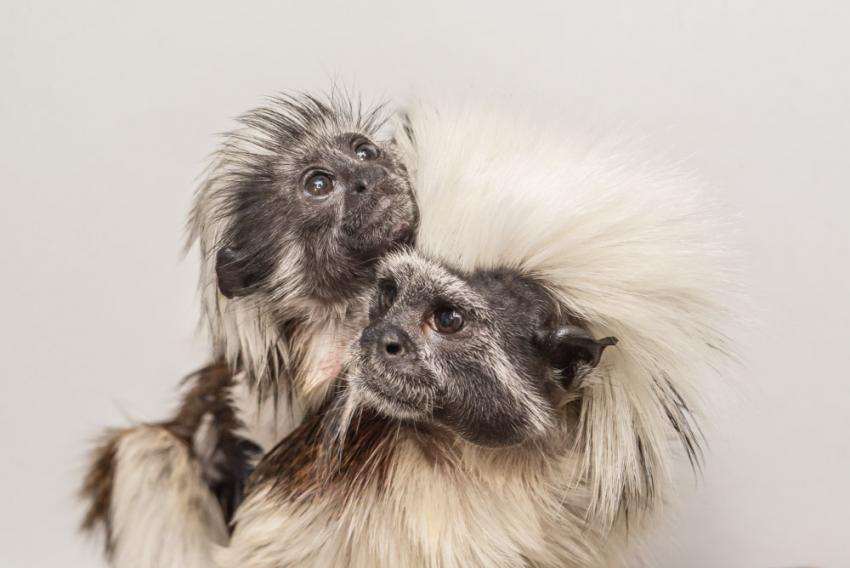 Three siblings, including a 3-month-old, are healthy, strong and active, keepers report

The Oregon Zoo's three cotton-top tamarins are doing well and have moved to a newly refurbished space in the zoo's Fragile Forests area, near the chimpanzees, where visitors might be able to see them as early as next week, officials announced.

The cotton-tops — a species of small New World monkey named for the striking crest of long white hair on their heads — came to the zoo as part of a larger family group in late May, but six of the monkeys died shortly after arrival from causes that remain unknown.

"Since that heartbreaking loss, we've been caring for the three surviving tamarins practically around the clock," said Chris Pfefferkorn, zoo deputy director. "The efforts of the veterinary and primate staff, including animal curator Jennifer Davis and senior keeper Asaba Mukobi, have been key — especially for the youngest tamarin, who was just 5 weeks old when she lost her mother."

"When we first discovered the loss of her family members, the baby was cold and shivering," Davis said. "We couldn't get her to eat, so I held her close to me, warming her the same way you would a human infant, and eventually we got her temperature up enough that she would sip the formula through a plastic syringe."

Curators and animal-care staff stayed with the tamarins until 11 p.m. that day to make sure they were stable, and from there began feeding the infant special formula several times a day, weighing her each morning to make sure she was getting proper nutrition and growing strong.

One reason the infant was able to survive, and even thrive, without her mother, Pfefferkorn said, is that tamarins are among the world's foremost practitioners of "alloparenting" — a form of shared childcare that scientists believe may have factored greatly in the evolutionary development of humans. Tamarins, along with humans and marmosets, are the only primates to engage in this type of "cooperative breeding."

"The youngest one is fully weaned now and has been eating solid food for several weeks," Davis said. "Her siblings are not carrying her around as much as they used to — she's growing up and exploring on her own. All three of them are healthy, strong and active, and we are very excited to welcome them to their new home."

Davis said the primate team has completely renovated the tamarins' new habitat, which contains three indoor spaces filled with plants and vines, as well as an off-exhibit rooftop area that lets them spend time outdoors.

Cotton-top tamarins are considered critically endangered in their native Colombia, where an estimated 75 percent of their original habitat has been destroyed over the past 20 years. The remaining population of roughly 6,000 cotton-tops is threatened by continued deforestation, even in protected areas. Since 1985, Columbia-based Proyecto Tití has worked to protect the species through field research, education and community programs.