Senior swim time: As temps near 100, Packy hits the pool 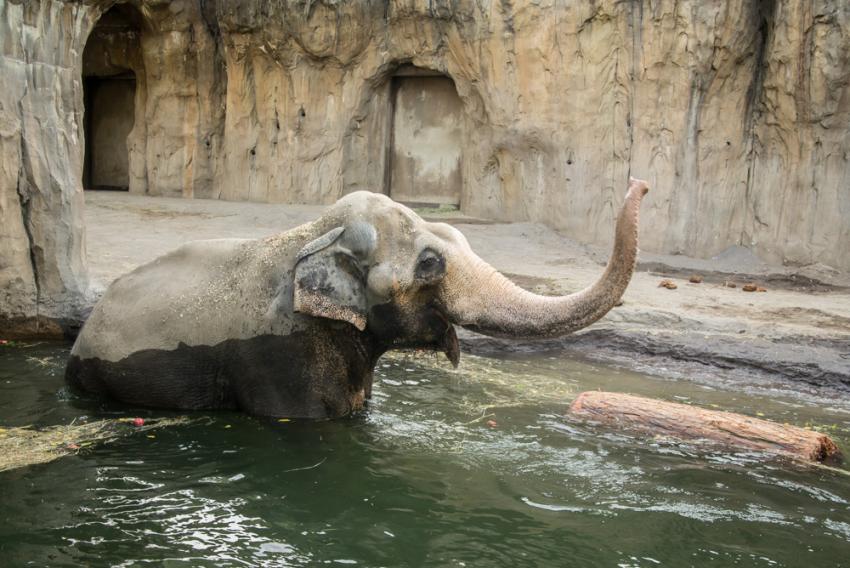 With forecasters calling for temperatures near 100 degrees today, one longtime local resident knew just how to beat the heat. Packy, the oldest male Asian elephant in North America, has been starting his days with a swim at the Oregon Zoo.

This morning, zoo videographers filmed the six-ton senior citizen ambling over to a 10-foot-deep swimming hole in the zoo's front elephant yard, where he played with a water jet and tossed around a 500-pound log like it was a rubber duckie.

Besides cooling him off, Packy's pool time also provides Jack LaLanne-style water aerobics and water therapy, easing some of the normal aches and pains associated with old age. At 52, keepers say, the famous pachyderm's health is generally good, but he is starting to slow down.

"He's a tough old guy," said animal curator Bob Lee, who oversees the zoo's world-renowned elephant program. "Sometimes it's easy to forget Packy's a geriatric elephant. At his age, we just want to give him the most comfortable life we can."

Zoo veterinarians also say Packy is taking well to the most recent course of treatment for combating tuberculosis, and has shown no clinical signs of illness.

"Packy's advanced age is one thing we take into account in creating a treatment plan," said zoo veterinarian Tim Storms. "We've been carefully watching his appetite and lab work. He's tolerating his current medication regimen better than he has before and maintaining a good weight, and we're hoping that continues."

In 1962, Packy became the first elephant to be born in the Western Hemisphere in 44 years, and he's held a special spot in his fans' hearts ever since. Packy's birth also helped scientists better understand elephants and opened the door to a new era in elephant welfare.

"Packy's birth started it all," Lee said. "The focus on elephant welfare, the knowledge about elephants. We've learned so much about this species since he was born, and we're grateful for the chance to put all that knowledge into the new Elephant Lands habitat here at the Oregon Zoo."

Elephant Lands — the fourth of eight major projects funded by a community-supported 2008 bond measure — is a sweeping expansion of the zoo's Asian elephant habitat that will quadruple the animals' space and dramatically enhance their daily experiences. Work on the new habitat, which has been carefully sequenced to gradually expand the elephants' accessible space in phases, will be completed in the fall of 2015.