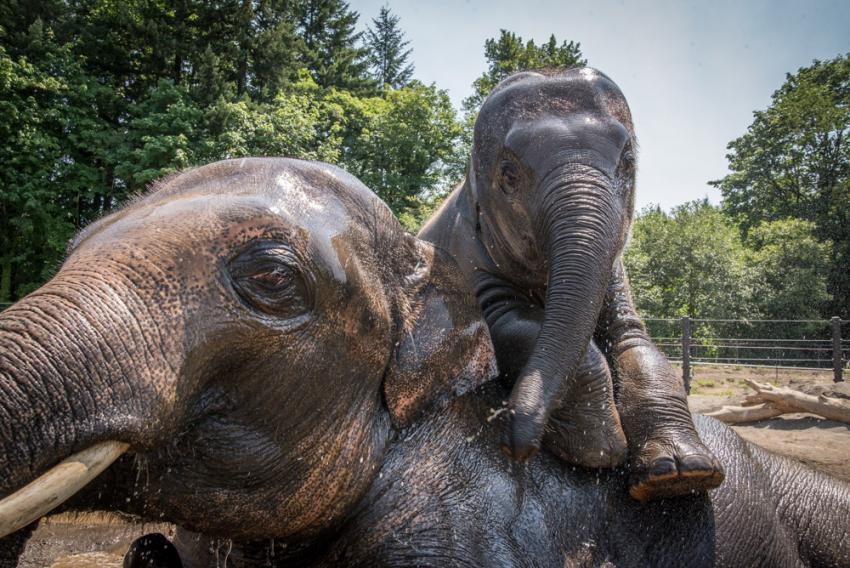 Elephant kids enjoy a mud party at the zoo

As work continues on the Oregon Zoo's expansive new Elephant Lands habitat, one thing is as clear as mud: Elephants — especially young elephants — love to wallow in the sticky stuff.

Samudra, who turns 6 this month, and his 1-year-old sister, Lily, have been spending much of their summer rolling, splashing and playing in the mud in the zoo's recently completed Encounter Habitat — while their mom, Rose-Tu, along with aunties Shine and Chendra, look on from safely out of splashing range.

Just to the north of Sam and Lily's muddy romp, crews continued work on the zoo's expansive new Elephant Lands habitat, where the variety of terrains will include hills, meadows, elephant-size swimming pools and, yes, mud wallows.

Planning for the expansive, naturalistic Elephant Lands reached a truly granular level over the past year, as designers researched, sampled and tested a variety of sands before settling on a just-right "Goldilocks" type deemed optimal for elephants. While much of the habitat is at least four feet deep in sand, care was taken to include some areas of harder-packed dirt that the elephants could dig up to create wallows.

Elephant Lands — the fourth of eight major projects funded by a community-supported 2008 bond measure — is a sweeping expansion of the zoo's Asian elephant habitat that will quadruple the animals' space and dramatically enhance their daily experiences. Work on the new habitat, which has been carefully sequenced to gradually expand the elephants' accessible space in phases, will be completed in the fall of 2015.