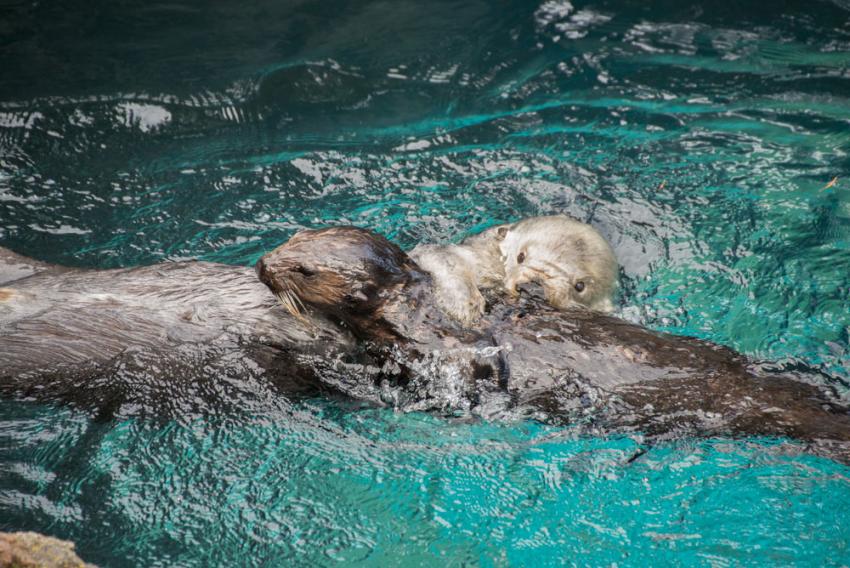 Oregon Zoo visitors might notice more splashing than usual at the Steller Cove sea otter habitat this month. The zoo's two geriatric otters — Thelma and Eddie, both 16 — are now hanging out with 8-month-old Juno, and keepers say the pup's youthful exuberance is keeping the older otters on their toes.

Juno, who has spent time with Thelma for the past several months, met Eddie for the first time last week, and keepers say the two are getting along well.

"There's been a lot of wrestling, which is what you expect when sea otters first meet," said keeper Jenny DeGroot, the zoo's sea otter lead. "It can look a bit rough to visitors sometimes, but it's normal otter behavior. By the end of their first day together, Juno was actually initiating the wrestling with Eddie, and she's definitely holding her own. She is one confident little otter."

Juno, who arrived at the zoo May 13, was found orphaned on a California beach in January. The Monterey Bay Aquarium's Sea Otter Research and Conservation program arranged for her rescue, but — with no experienced adult otters available to rear her — the U.S. Fish and Wildlife Service deemed the young pup non-releasable and approved her transfer to the Oregon Zoo.

Although Juno has grown quite a bit since then, she is still much smaller than Eddie, who at 68 pounds is more than twice her size. Juno now weighs 32 pounds and should eventually grow to around the size of Thelma, who weighs 50. She has rich brown fur over her entire body, whereas Thelma's and Eddie's coats have turned creamy white with age around the face and neck.

"Having a youngster like Juno around should be rejuvenating for both Thelma and Eddie," said Nicole Nicassio-Hiskey, the zoo's senior marine life keeper. "We have a lot of really old animals here, so we focus quite a bit on geriatric care."

In 2012, Thelma and Eddie were included in an Oregonian article about elderly Oregon Zoo inhabitants highlighting the ways keepers and veterinary staff care for animals approaching the end of life. Eddie gained an additional measure of fame the following year, when animal-care staff trained the aging otter to dunk a toy basketball as therapy for his arthritic elbow joints. A video about this behind-the-scenes exercise routine went viral, clocking more than 1.3 million views on the zoo's YouTube channel.

Eddie and Thelma have lived at the Oregon Zoo since 2000, on long-term loan from the U.S. Fish and Wildlife Service. Like Juno, both were rescued along the coast of California, where they were abandoned as pups in 1998. Lacking the skills to survive on their own in the wild, they were taken to the Monterey Bay Aquarium for rehabilitation but were eventually deemed non-releasable by USFWS.