Fall forecast: Cloudy with a slight chance of cubs 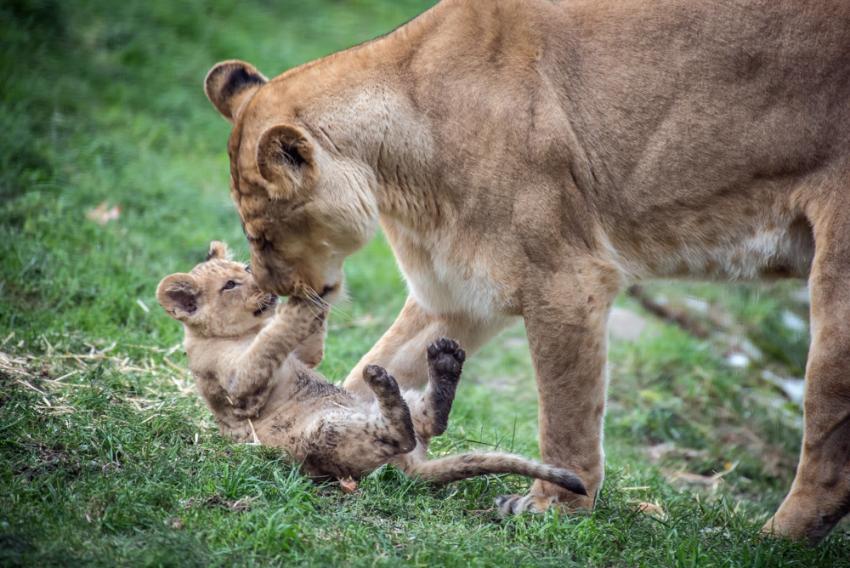 Kya's cubs begin to explore the zoo's outdoor lion habitat, but no viewing hours are set

Kya's cubs have begun to explore the outdoor lion habitat at the Oregon Zoo, but only for short periods and not according to a set schedule, animal-care staff said.

The playful trio enjoyed some outside family time yesterday as keepers took advantage of the dry weather to get the cubs acquainted with their new space. The cubs might be out from time to time now, weather permitting, but keepers say their official public debut may have to wait for spring, when they're a little bigger and temperatures have started to rise.

"Visitors might catch glimpses of the cubs in the coming weeks, but all the conditions need to be just right," said Laura Weiner, senior keeper of the zoo's Africa area. "The animals' welfare is the guiding principle. Right now, we're only considering days when it's dry outside and close to 50 degrees. Whenever possible, we'll post updates on Facebook and the zoo website to let people know."

Before letting the cubs into the outdoor space, keepers spent a little time "baby-proofing" it — draining the pool and lining the bottom of the moat with straw bedding.

The three cubs — named Hasani, Mashavu and Niara — have been living in a private maternity den and spending some time in a behind-the-scenes outdoor space since their birth Sept. 8 to Kya, a first-time mom.

The zoo's three adult lions — Kya, Zawadi and Neka — came to the Oregon Zoo in 2009 based on a breeding recommendation by the Association of Zoos and Aquariums' Species Survival Plan for African lions. The AZA has established Species Survival Plans for many threatened or endangered species — cooperative breeding programs that help create genetically diverse, self-sustaining populations to guarantee the long-term future of animals. These SSPs also support relevant field projects, research and public education to help prevent animal endangerment and extinction.

"Just two decades ago, lions were plentiful in much of Africa," Weiner said. "But today they are vanishing at alarming rates. The wild lion population is estimated to have dropped by 75 percent since 1990. Hopefully, we can start a new chapter in lion conservation."

Last month, the U.S. Fish and Wildlife Service proposed listing African lions as threatened under the Endangered Species Act, noting that they are in danger of extinction due to habitat loss, loss of prey base and increased conflict with humans. The Oregon Zoo supports Living with Lions, a conservation research group working to protect Africa's dwindling lion populations by employing Maasai warriors to monitor and help reduce human conflict with predators.