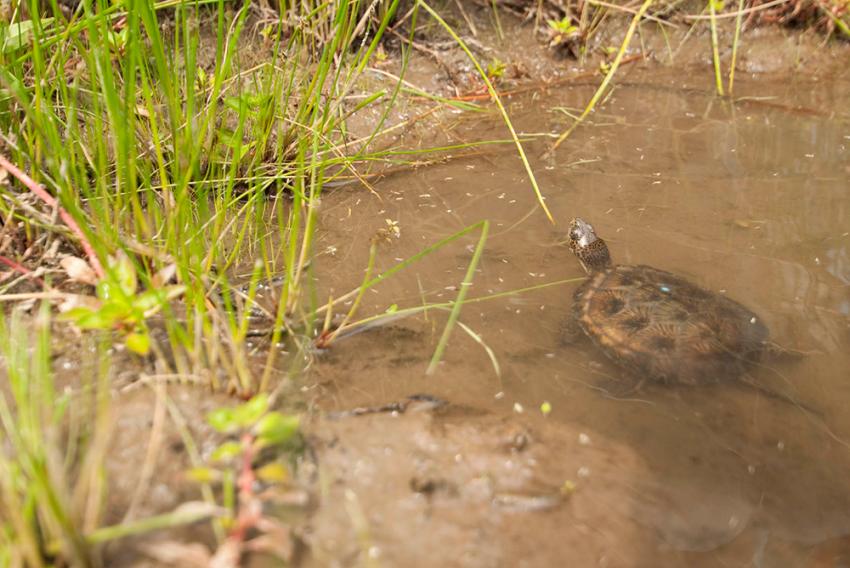 A two-year comprehensive turtle survey, the first of its kind in Clackamas County, has failed to document any trace of the imperiled western pond turtle during its first year of searching, according to a recent report.

A biologist-led team of volunteers searched 15 sites, returning to each site four times during the spring survey, which was funded in part by an Oregon Zoo Future for Wildlife grant. The sites ranged from remnant natural wetlands to stormwater ponds found behind big-box stores, representing a spectrum of available turtle habitats in Clackamas County. 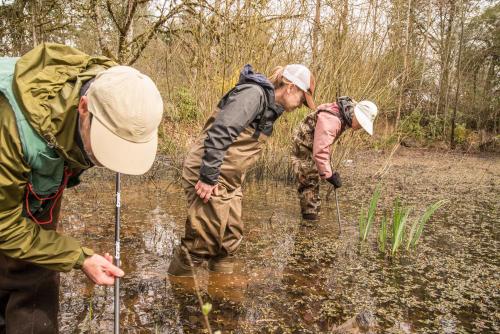 Sign up for the 2015 Clackamas County amphibian and turtle survey.

Oregon Department of Fish and Wildlife conservation biologist Susan Barnes called the failure to spot a single individual at the 15 sites "moderately alarming."

"It's clear that there are not a lot of turtles out there, but it will take more years of data to understand what's happening with local western pond turtles and why," said Barnes, who oversaw the survey. "We know that western pond turtles live in a few areas of Clackamas County that were not part of the 2014 survey."

Pond turtle populations have declined throughout their West Coast range for a number of reasons, including destruction of their wetland habitat, conflict with invasive species and a recently discovered shell disease. The species is listed as sensitive in Oregon and endangered in Washington, can live up to 70 years and prefers streams, ponds, lakes and permanent wetlands.

The survey documented two other turtle species in Clackamas County: the native western painted and the non-native red-eared slider. Transplants from the south-central U.S., red-eared sliders are an invasive species that commonly enter the environment after being "released" as unwanted pets. Once established in local waterways, they compete with native turtles for nesting areas, basking sites and food, and often carry parasites or disease that can wipe out native turtle populations.

"It will take more years of data to understand what's happening with local western pond turtles and why."

The amphibian egg mass portion of the survey documented several healthy populations of native red-legged frogs, which require both wetlands and adjacent forests to survive.

"We had a great pool of volunteers last year, many of whom found out about the project through the Oregon Zoo," said James Holley, who led the turtle and amphibian egg mass surveys. "Our amphibians and reptiles are in trouble, and getting into their habitat to look for them is a very tangible way for Oregonians to protect wildlife. When communities collect data through citizen science, they're making an investment in the ecosystem."

More than 40 volunteers, ranging from sixth graders to retirees, participated in the 2014 surveys.

A second round of volunteer turtle and amphibian surveys is scheduled for this winter and spring. Portland-area residents interested in surveying should be in good physical condition and can expect to devote about two hours on the day of their survey. To learn more, fill out this online form.

Since 1998, the Oregon Zoo has worked closely with partners including the Washington Department of Fish and Wildlife and Woodland Park Zoo to recover Washington's western pond turtle populations. The Oregon Zoo participates in a "head-starting" project, rearing turtle hatchlings in a protected environment until they're large enough to evade predators such as the invasive bullfrog. Head-started turtles are released back into Washington, into suitable areas of suitable habitat protected and managed specifically for natural resource values.