Today wildlife advocates in Salem announced new legislation to end the trade of elephant ivory and rhinoceros horn in Oregon. 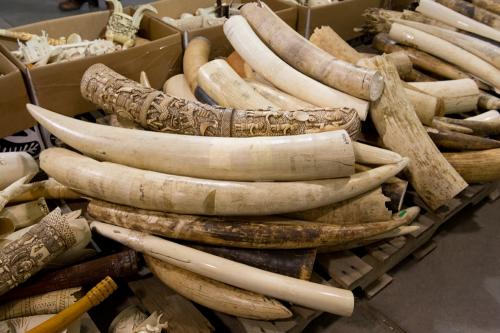 Voice your support for SB 913.

"Ivory trafficking is an international crisis directly contributing to the endangerment of elephants and rhinos, and it is also linked to funding terrorist organizations," Sen. Hass said. "It is important that Oregon take a stand against this illegal trade."

In 2014, the Obama administration announced a federal ban that prohibits nearly all commercial imports, exports and interstate sales of elephant ivory. That law leaves ivory sales within states uncontrolled, which bolsters a black market for newly poached ivory.

The Oregon ivory bill does not make possession of ivory illegal, and makes certain exceptions for the sale of common antique pieces containing small amounts of ivory, such as ivory-inlaid musical instruments, guns and knives.

"The black market trade in ivory and rhino horn is driving global rhino and elephant populations to the brink of extinction," said Scott Beckstead, senior Oregon director for The Humane Society of the United States. "Oregon can do its part to protect these iconic animals by passing SB 913 to crack down on the sale of these products within the borders of our state."

Illegal killing reduced the African elephant population from 1.2 million in 1989 to 420,000 in 2012. The majority of ivory tusks are turned into ornamental objects, jewelry and trinkets.

High ivory prices have attracted insurgent terrorist groups such as al-Shabab and al-Qaida. State legislation would strengthen regulation and complement federal law to stop the underground trade and protect these species from extinction.

"Humans can survive without ivory," said Dr. David Shepherdson, the zoo's deputy conservation manager. "Elephants can't. Through this legislation, Oregonians can tell the world that an elephant's life is more valuable than a trinket."