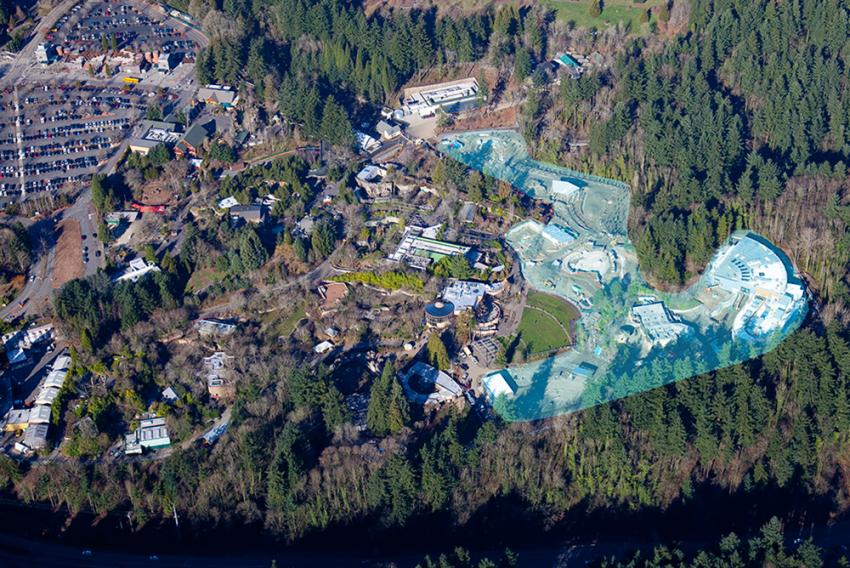 Just out of view of visitors, the biggest project in Oregon Zoo history is taking shape.

Construction on Elephant Lands — the fourth of eight major projects funded by the community-supported 2008 zoo bond measure — will reach a major turning point this spring with the completion of the new indoor facility and the north meadow portion of the habitat.

Although zoo visitors won't get a good look at the entire habitat until fall, aerial photos taken last week provide a stunning preview of what Elephant Lands will look like: a sweeping expanse that extends around the eastern edge of the zoo, from south of the concert lawn north into the area formerly housing Elk Meadow.

"I think people will be amazed by the scope of this project," said Jim Mitchell, zoo construction manager. "Some of the work can be seen from visitor pathways now, but most — especially construction of the indoor portion — has been taking place behind the scenes." 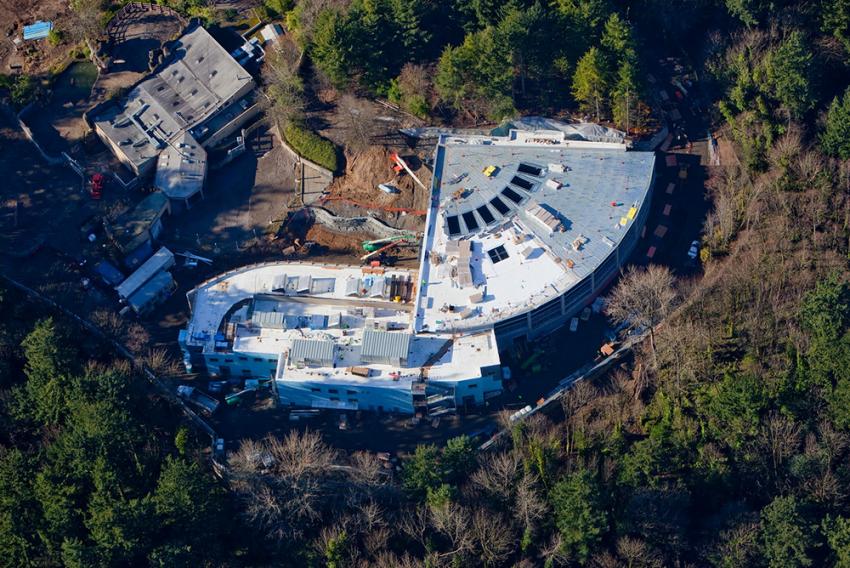 You might think a building that size — covering 32,000 square feet, with a roof reaching up to 43 feet at its highest point — would be hard to miss on zoo grounds, but unless you're in a hardhat area it's almost impossible to see right now, according to Mitchell.

"Seen from above, the Forest Hall portion of the indoor habitat is roughly the same size and shape as the concert lawn," Mitchell said. "It's like looking at twin baseball fields, one outdoors and one indoors."

Additional photos taken from inside Forest Hall offer a glimpse of what's to come — a vast, sunlit arena housing one of the largest, most innovative indoor elephant spaces in the country. With natural light streaming in through large overhead skylights, the zoo's elephant family will move across a lush, forested backdrop seen through a 1,820-square-foot glass curtain wall. 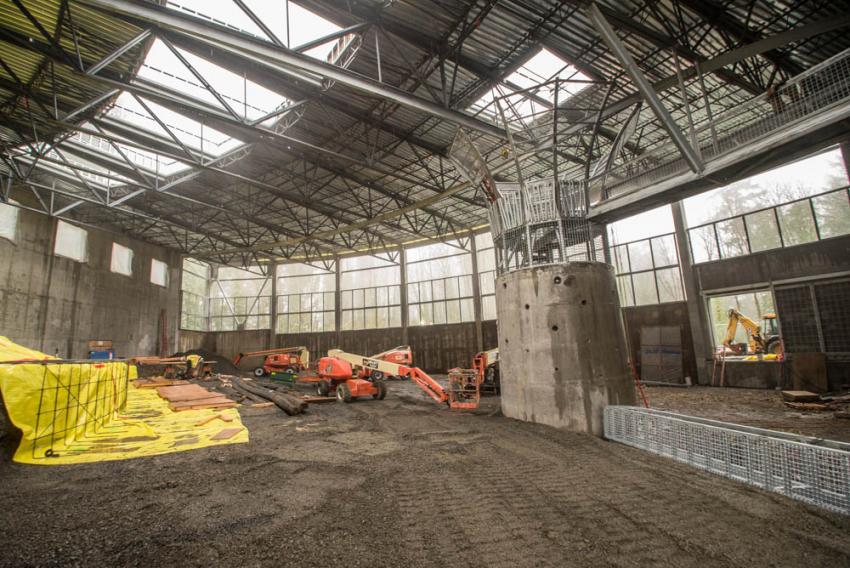 An "enrichment tree," accessible to keepers via elevated walkway, will help encourage natural foraging behaviors among the elephants — one of many innovative feeding structures designed to keep the herd moving and provide mental stimulation.

And an elephant-sized "air curtain" separating Forest Hall from the outdoor areas will maintain a constant, comfortable indoor temperature for pachyderms and visitors while providing the herd around-the-clock access to the rest of Elephant Lands.

Adjacent to Forest Hall, a spacious new care center — with three 1,600-square-foot stalls — will soon replace the zoo's current indoor area, which dates to 1959. Like the outdoor habitats, indoor spaces will be filled four feet deep with sand to cushion and protect the elephants' feet.

"We've learned a lot about caring for elephants since the 1950s," said Bob Lee, the zoo's elephant curator. "And we're grateful for the chance to put all that knowledge into this new habitat, which is going to make the lives of all the elephants so much better."