Someone left a cake out in the rain, and Packy destroyed it

Famed Asian elephant Packy — the oldest male of his species on the continent — turned 53 today, and keepers presented the six-ton senior citizen with a cake to match the occasion: a 50-pound whole-wheat confection, frosted with buttercream and topped with carrots, celery, bananas, apples, pears and sweet potatoes.

"Packy has definitely slowed down in his old age, but he wasn't about to miss out on his cake," said Bob Lee, the zoo's elephant curator. "He made a beeline straight for it this year. Like any old-timer, Packy has his good days and his not-so-good days. I'd say this has been one of his good ones." 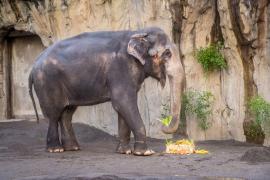 Although Packy didn't pause to appreciate the cake's artistry before digging in, zoo sous chef Jeanne Laravuso, who prepared the confection, takes no offense.

"As long as Packy liked it, that's all I care about," Laravuso said. "I've never baked for an elephant before, so this was really a treat for me. The recipe was pretty simple, and except for the frosting it was pretty healthful too. It was basically just whole wheat flour and some of his favorite fruits and vegetables."

Laravuso decorated the three-layer sheet cake with intricate designs — lining the sides with sweet potato, pear and apple slices, and carefully arranging bunches of carrots, celery and bananas on top.

"It looked good," Lee said. "In fact, a couple of the keepers couldn't help dipping their fingers in to taste the frosting before delivering the cake."

Packy typically gets his cake at Elephantastic, the zoo's annual celebration of pachyderms — held this year on April 25 — but public viewing opportunities have been complicated for the past couple of years, both by construction of Elephant Lands and Packy's TB status.

"The back sand yard where Packy typically hangs out is now a hardhat area that's inaccessible to visitors," Lee said. "And Packy has not been on consistent treatment long enough to be in the front area."

Though Packy has shown no signs of illness from tuberculosis, treating him has proved challenging, according to zoo veterinarians.

"Packy's advanced age is one thing we take into account in coming up with his treatment plan," said Dr. Tim Storms. "We're hopeful that this new course of treatment, which started about a month ago, will be the one that works for him."

"At his age, we just want to give Packy the most comfortable life we can," Lee said. "His toughness always impresses me. Sometimes it's easy to forget he's a geriatric elephant."

In 1962, Packy became the first elephant to be born in the Western Hemisphere in 44 years, and he's held a special spot in the community ever since. Packy's birth also helped scientists better understand elephants and opened the door to a new era in elephant welfare.

Packy arrived shortly before 6 a.m. on April 14, 1962, earning international attention. At the time, only nine other elephants had been born in North America, and none since 1918. Pioneering journalist Shana Alexander covered the occasion with an 11-page feature in Life magazine describing the "nativity of Packy."

In the late 1950s, the zoo's first vet, Matthew Maberry, was part of a team working to design new facilities that provided elephants with much more freedom than was common in zoos at the time. These facilities, built in 1960, allowed for normal social interactions and natural breeding among the elephants, which led to a string of successful pregnancies and births. From the time of Packy's birth in 1962 to his son Rama's birth in 1983, nearly 80 percent of the Asian elephants born in North America — 22 out of 28 — were born here in Portland.

"Packy's birth started it all," Lee said. "The focus on elephant welfare, the knowledge about elephants. If you think about the time when he was born, it's mind-boggling — Kennedy was president, the Beatles hadn't made any records yet, cigarettes didn't have warnings from the Surgeon General. We've learned so much about this species since Packy was born, and we're grateful for the chance to put all that knowledge into the new Elephant Lands habitat."