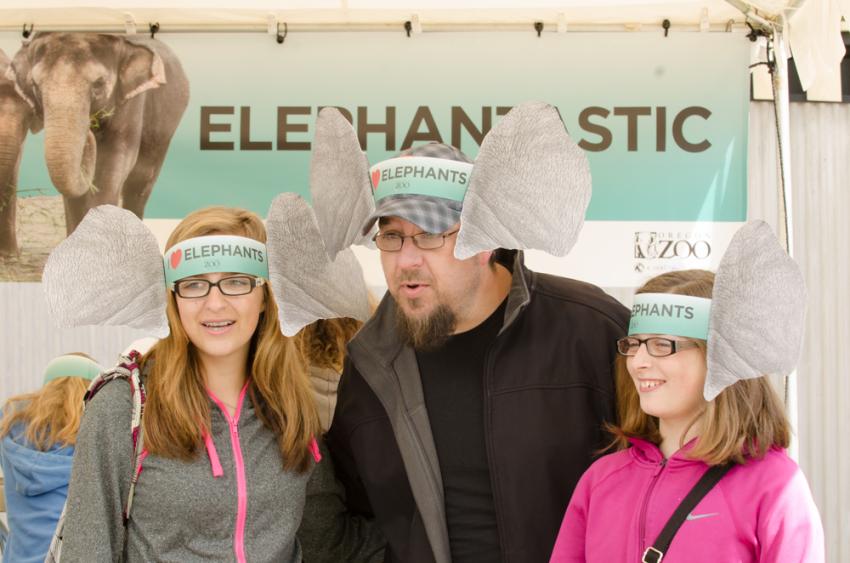 More than 4,000 visitors showed up at the Oregon Zoo today for the once-in-a-lifetime chance to “test drive” a section of Elephant Lands before Lily, Samudra and the others move in next month.

The occasion was Elephantastic, the zoo’s annual celebration of pachyderms, and — with work on the expansive new habitat entering the home stretch — visitors were offered a rare elephant’s-eye look at history in the making.

Kids seemed especially enthused by the opportunity — donning paper elephant ears to trek over the hilly terrain, climbing on giant logs and learning about the many beneficial features of the soon-to-open north section of the habitat.

Some undoubtedly took home bits of the new stomping grounds in their shoes: The area is filled 4 to 5 feet deep with sand to cushion and protect elephants’ feet, which have evolved to support their enormous weight over a variety of natural terrains.

Also open for Elephantastic: the new Elephant Plaza visitor area near the top of the concert lawn, where family-fun activity stations offered information on the rest of Elephant Lands, opportunities for visitors to take action on behalf of wild elephants, and hands-on educational activities for kids. In remembrance of Rama, visitors also created paintings in the style of the recently deceased elephant, known for his Jackson Pollock-like painting technique.

Elephant Lands — the fourth of eight major projects funded by the community-supported 2008 zoo bond measure — will be four times larger than the zoo’s current elephant habitat, extending around most of the zoo’s eastern end, from south of the concert lawn north into the area formerly housing Elk Meadow. The entire habitat will be complete later this year. To learn more, visit oregonzoo.org/ElephantLands.

“We’ve learned a lot about caring for elephants since the early days,” said Bob Lee, the zoo’s elephant curator. “If you think about the time when Packy was born, it’s mind-boggling: Kennedy was president, the Beatles hadn’t made any records yet, cigarettes didn’t have warnings from the Surgeon General. We’ve learned so much about this species since that time, and we’re grateful for the chance to put all that knowledge into the new Elephant Lands habitat.”