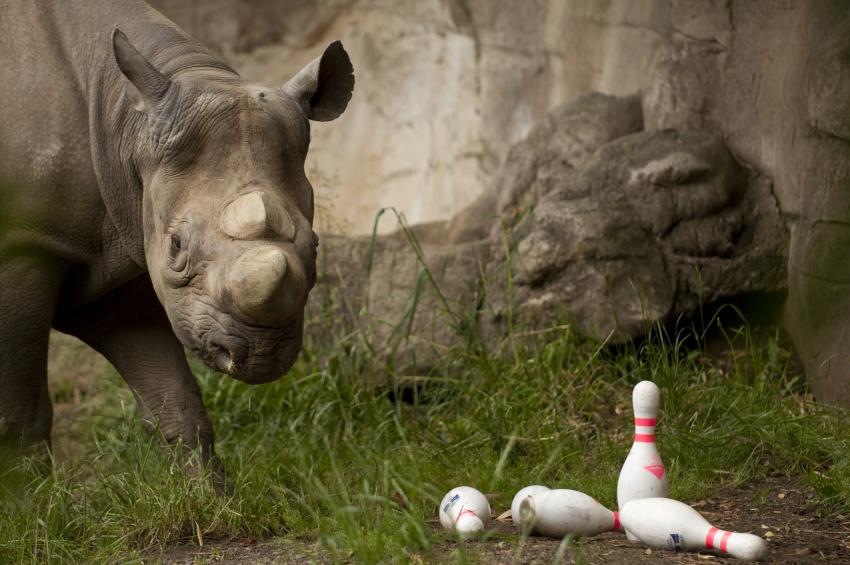 It's a critical time for rhinos worldwide. More than 1,200 rhinos were killed last year in South Africa alone. And with two of the five rhino species perilously close to extinction, the Oregon Zoo's Bowling for Rhinos fundraiser, now in its 26th year, is more important than ever.

All proceeds from Bowling for Rhinos go directly to field conservation projects.

"Bowling for Rhinos is a great opportunity to help some of the most endangered animals on the planet," said zoo curator Michael Illig, who's helped organize the fundraiser since 1990. "Rhinos are in serious trouble, with poaching and illegal trade at their highest levels ever."

Bowling for Rhinos — taking place Saturday, June 13, from 3:30 to 6 p.m. at Sunset Lanes in Beaverton — is the American Association of Zoo Keepers' largest conservation fundraising event.

All proceeds from Bowling for Rhinos go directly to field conservation projects, conserving four species of rhino, their habitats, and hundreds of other endangered plants and animals.

Bowling for Rhinos now supplies part of Lewa Wildlife Conservancy's $850,000 annual operating budget and over the past few years has been able to provide the conservancy with a single-engine spotter plane, a large transport truck for relocating animals, solar-powered electrical fencing and more. The International Rhino Foundation oversees funding in the Indonesian parks, where AAZK has provided much-needed boats, uniforms and training for poaching guards.

All rhino species are illegally hunted to feed the traditional medicine demand for rhino horn, which is made of the same substance as human fingernails. China and Vietnam are the greatest consumers of rhino horn.

"The number of rhinos left in the world is critically low," Illig said. "So group efforts like Bowling for Rhinos can make a big difference around the world."

Nationally, Bowling for Rhinos raised more than $481,000 last year, and it has raised more than $5.4 million since its inception. Portland-area bowlers are responsible for nearly $293,000 of that — the second-highest total of any AAZK chapter in North America.

Teams and individuals can register to participate by emailing portlandbfr@gmail.com. Bowlers raise funds by gathering tax-deductible pledges from friends, family and anyone who wants to keep rhinos from extinction. While bowlers are not required to collect pledges to participate, every dollar makes a difference for rhinos. A $10 participation fee includes shoe rental and three games of bowling. The Portland event features door prizes and raffles for a variety of items, and five free raffle tickets are awarded for every $100 collected in pledges.