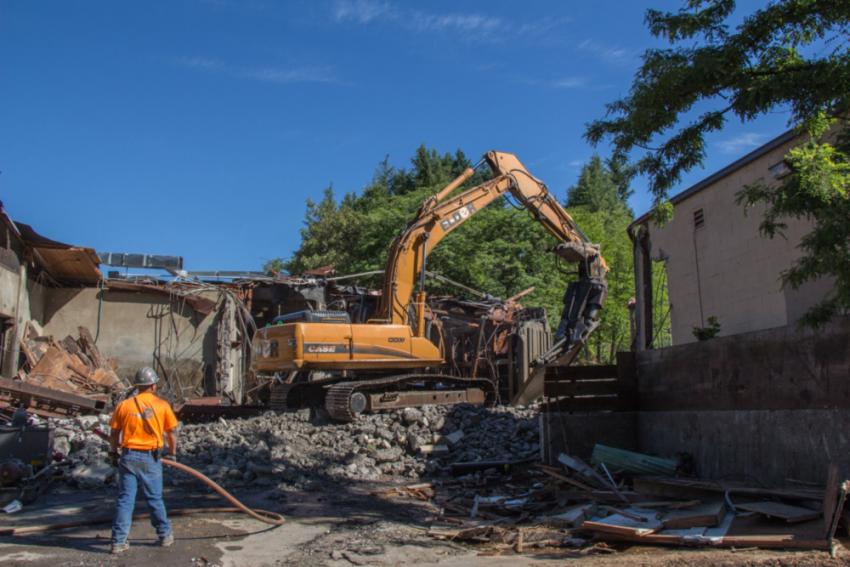 On Monday, two huge excavators with shear attachments began ripping away concrete and rebar from the zoo's old elephant barn — a building that for the past 50-plus years served as North America's most active pachyderm nursery but will soon linger only as a memory.

"It was considered state-of-the-art for 1960, and we've come a long way since then, both in terms of construction advances and elephant welfare."

Once the old building is cleared away, the whole area will be transformed, says zoo construction manager Jim Mitchell, and crews will begin connecting the southern and northern portions of Elephant Lands. Four times larger than the zoo's old elephant habitat, Elephant Lands will extend around most of the zoo's eastern end, from south of the concert lawn north into the area formerly housing Elk Meadow. The entire project is expected to be complete later this year.

"This building has a lot of history, but I don't think anyone's sorry to see it go," Mitchell said. "It was considered state-of-the-art for 1960, and we've come a long way since then, both in terms of construction advances and elephant welfare."

In the late 1950s, the zoo's first vet, Matthew Maberry, was part of a team working to design new facilities that provided elephants with much more freedom than was common in zoos at the time. These facilities allowed for normal social interactions and natural breeding among the elephants. Elephants were not chained indoors overnight as they commonly were in other zoos at the time. The unprecedented freedom led to an extraordinary string of successful pregnancies and births. 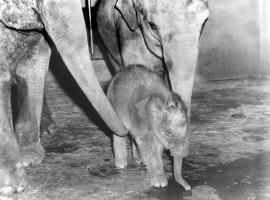 How extraordinary? For the first eight decades of the 20th century, right up through 1980, just 28 Asian elephants were born anywhere in North America. Nineteen of those — more than two-thirds — were born in Portland. Of the nine born elsewhere during this time, the infant mortality rate was 100 percent: Until the 1980s, not a single Asian elephant born anywhere on the continent — except for Portland — survived to one year of age. It is easy to understand how Portland's zoo gained a reputation as "the elephant zoo."

"These were completely uncharted waters," Lee said. "Before Packy arrived in 1962, just one elephant had been born in any North American zoo — that was in 1918, and he lived for just a few weeks."

For three months before Packy's birth, the elephant barn buzzed with reporters, looking like extras from an early 1960s film — playing poker, smoking, sleeping on hay and waiting. By the time Packy's mother, Belle, went into labor, many reporters had given up. Belle's pregnancy delivered Packy to us, of course. It also taught the wildlife community that an Asian elephant's gestation lasts around 22 months.

In the 20 years following Packy's birth, the old barn yielded new discoveries with each elephant birth — the elephant estrous cycle, the age at which males reach sexual maturity, etc.— but there were still surprises along the way. On one occasion, keepers arrived to find a wobbly calf born the night before.

"If you look back at those early years — the 1960s and '70s and even into the '80s — it's not all pretty," Lee said. "There was inbreeding, some elephants were sent away to circuses. The things that are obvious to us as animal-care professionals today were unknown to — or rather first learned by — the people who worked here 35 or 40 years ago. It's hard to look back some of that history, knowing what we do now. It's tempting to say, 'You should have known better' or 'You should have done things this way.' But what we need to realize is the folks who were here back then had literally no experience to draw from. If you think about the time when Packy was born, it's mind-boggling — Kennedy was president, the Beatles hadn't made any records yet, cigarettes didn't have warnings from the Surgeon General. It was a different era. They were writing the book on elephants as they went."

Looking back at the zoo's long history with elephants, Lee feels proud to work for an organization that has been so crucial to developing the science behind today's elephant welfare practices.

"We've had successes and failures over the years," Lee said. "And the great thing is that we have talked openly about both. We've shared all our experiences with other zoos and researchers, both the things we did well and the things we didn't. It's been so gratifying to be able to put all that collective knowledge into Elephant Lands, and now to watch it transform from designs on paper and artists' renderings into actual physical reality."