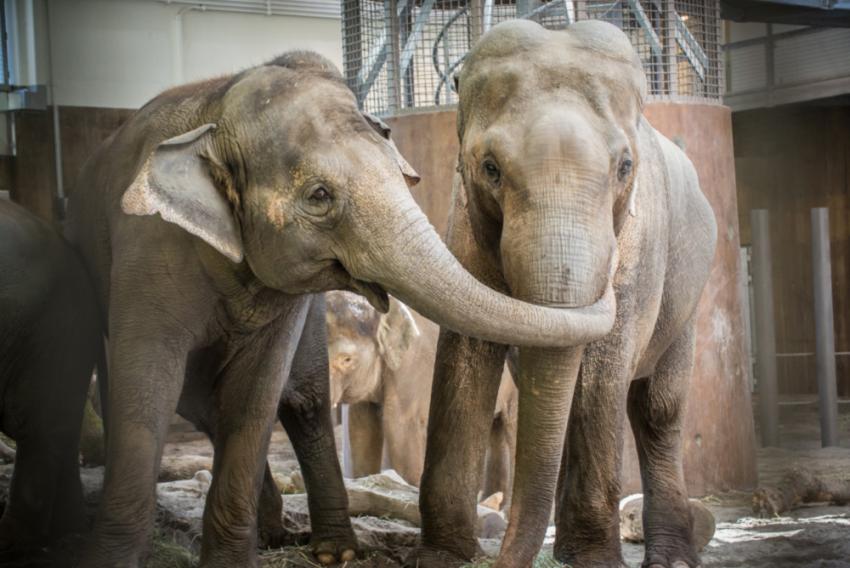 Following a year of treatment and tests, vets clear Tusko to spend time with others

A chorus of chirps, trumpets and thunderous roars echoed through Forest Hall yesterday, as 44-year-old Tusko rejoined the Oregon Zoo elephant family for the first time in more than a year.

"It was clearly an emotional time for all, from the elephants to the folks here who care for them," said Bob Lee, the zoo's elephant curator. "It's always exciting when an adult male joins the female herd, and this was quite a reunion. When Shine first walked up to Tusko, her roars sounded like something out of Jurassic World. Tusko was as calm and unflappable as ever."

Tusko, father to both Samudra and Lily, had been living apart from the other elephants since testing positive for tuberculosis in June 2014, but veterinarians and public health officials have now deemed it safe for him to rejoin the herd. In the weeks ahead, keepers will gradually begin reacquainting him with Samudra, who turns 7 this August, to provide some life lessons in what it means to be a bull.

"This is especially important for Samudra's development as he matures and grows into a bull elephant," Lee said. "Social bonds are crucial, especially for younger animals. Our hope has always been that seeing male behavior modeled from an early age will have a positive effect on Samudra's ability to socialize with the herd as he matures. Tusko's TB diagnosis put that on hold for a while, but hopefully we'll get back on track now."

In 2012, Tusko began teaching Samudra how male elephants, called bulls, interact with female elephants. Tusko taught the youngster to respect him as the dominant male of the family grouping by, among other things, waiting to eat until after Tusko had eaten and not facing the impressive bull directly.

The hope is that by learning to be a submissive male elephant in his youth, Samudra will mature more slowly and be able remain with his mother and aunties for a longer time before separating from the herd, as males do in the wild. In a natural setting, Lee said, adult male elephants are not permanent members of family herds. The majority of their time spent with females is for courtship and breeding, and the rest of the time, they live apart.

Lee says the new Elephant Lands habitat — now in its final phase of construction — was designed to allow bull elephants to drift in and out of the herd, minimizing keeper-made decisions about which elephants socialize together at any given time and letting the elephants decide how and where they spend their days and nights.

"We were very cautious about deciding when an elephant should be considered no longer contagious and Tusko clearly meets the criteria," said Dr. Jennifer Vines, deputy health officer for Multnomah County. "We have no concerns about him sharing the same space with other elephants or being seen by the public."

Dr. Vines and state public health veterinarian Dr. Emilio DeBess worked closely with the zoo to develop guidelines regarding when elephants that have been exposed to TB can be deemed non-infectious and safely share the same habitat with others. The criteria include several months of adequate antibiotic treatment and at least three consecutive negative monthly tests for active TB.

"Tusko has been on steady treatment since just after his diagnosis a year ago," said Dr. Tim Storms, the zoo's senior veterinarian. "He has not shown any signs of illness from TB, and he has consistently cultured negative since his initial diagnosis."

At around 44 years old, Tusko is one of the oldest males of his species in North America. In 2012, he was featured in an Oregonian article about elderly Oregon Zoo inhabitants that highlighted the ways keepers and veterinary staff care for animals approaching the end of life. More than three years later, Tusko is noticeably slowing down, Lee says. In particular, he has been affected by mobility issues stemming from injuries he sustained as a circus elephant, before the zoo was able to give him a home in 2005.