Star Trek penguins get in the swim of things 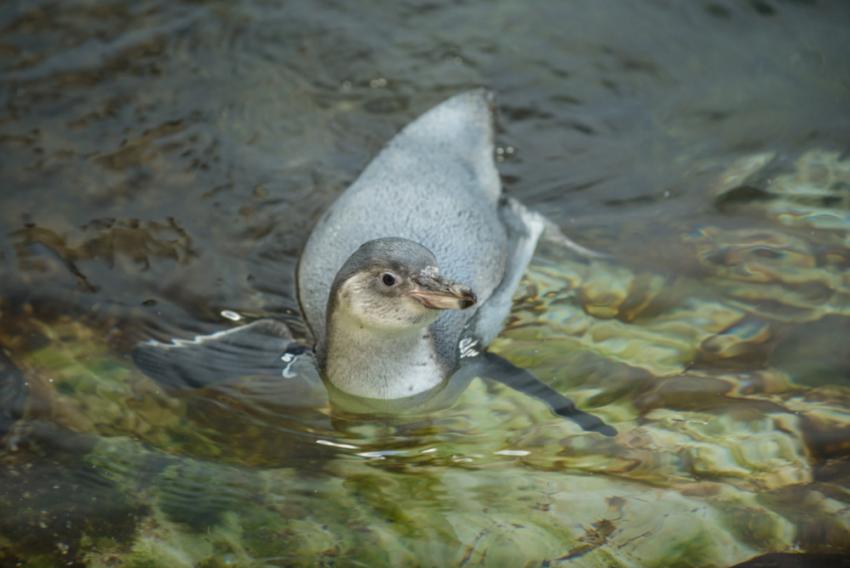 CAPTAIN'S LOG, STARDATE 2015.159: Two rare avian life forms are adjusting well to their new surroundings and make for fascinating viewing. In the meantime, our crew continues to support the progress of these fragile creatures on other parts of the planet's surface in an effort to prevent their extinction.

Two new Humboldt penguin chicks that hatched at the Oregon Zoo this spring have begun to emerge from their nest boxes and explore their surroundings, keepers say.

Visitors can now see the 3-month-old birds — which keepers have named after popular "Star Trek" characters Uhura and Seven of Nine — waddling over the rocky terrain and darting through the clear water of the zoo's penguinarium.

"Much like the crews of the Enterprise and Voyager, these penguins serve as ambassadors for their species," said Gwen Harris, the zoo's senior bird keeper. "We hope they inspire visitors to join the zoo in its conservation efforts."

Though nearly as tall as the adult Humboldts, the young penguins are easy to tell apart: they are gray all over and lack the tuxedo-like plumage of the fully grown birds — notably the distinctive horseshoe-shaped band in the chest area. This year's arrivals can be distinguished from last year's chicks, which are also still gray, by the numbers on their armbands: Uhura's is No. 1, and Seven of Nine's is No. 10.

Young penguins can swim right away once they fledge — no lessons needed — and zoo visitors should have good views of these sleek sea birds darting through the clear waters of the zoo's penguinarium. In 2012, the zoo completed a much-needed upgrade of the penguinarium's water-filtration system, one of many improvements funded by the community-supported 2008 zoo bond measure aimed at protecting animal health and safety while conserving and recycling water. The upgrade saves millions of gallons each year.