Zuri, the Oregon Zoo's female black rhino, can expect some company soon. Ruka, a 4-year-old male rhino from the Saint Louis Zoo, arrived in Portland last month, and keepers hope the rhino pair will hit it off and perhaps add to the population of this critically endangered species.

Ruka, whose name is Swahili for "jump" or "bounce," was born at the Saint Louis Zoo in January 2011. His transfer to Portland was recommended by the Species Survival Plan for black rhinos, an Association of Zoos and Aquariums' cooperative breeding program aiming to provide a sustainable, genetically diverse population. 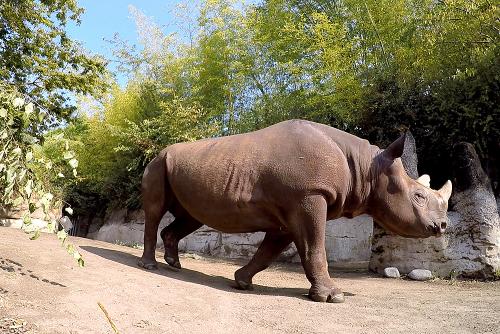 5 ways to take action for rhinos

"We've gone from half a million to a few thousand rhinos left in the blink of an eye," U.K. naturalist Steve Backshall noted in a Huffington Post column last week. "While those left in the wild are ludicrously precious, the rhinos that are in zoos (which were bred there, born there and cannot ever be released into the wild) are of disproportionate importance to their kind."

While Ruka has yet to meet Zuri, he has already begun to make some public appearances at the zoo's Africa Savanna habitat. Last week, he explored the outdoor yard for the first time — tentatively at first but with increasing confidence, according to keepers in the area.

At one point, keeper Jeb Barsh reported, Ruka climbed into a mud wallow, lying down and playing in the mud for 10 minutes. Then, after a bite to eat, he strolled back to the other side of the habitat, pausing beneath a soaker hose and turning himself around and around for a cooling shower.

"He was muddy, wet and seemed to be enjoying his first yard experience," Barsh said.

While Ruka was exploring the outdoor habitat, keepers treated Zuri to a "spa day" inside, with a bath, pedicure and lots of TLC.

Black rhinos are among the most endangered mammals in the world," said curator Bob Lee, who oversees the zoo's rhino area. "All rhino species are in serious trouble — poaching and illegal trade at their highest levels ever. More than a thousand rhinos were killed last year in South Africa alone. Hopefully, we can inspire a new chapter in the conservation of this amazing animal."