New caracal kittens up the cuteness ante at Oregon Zoo 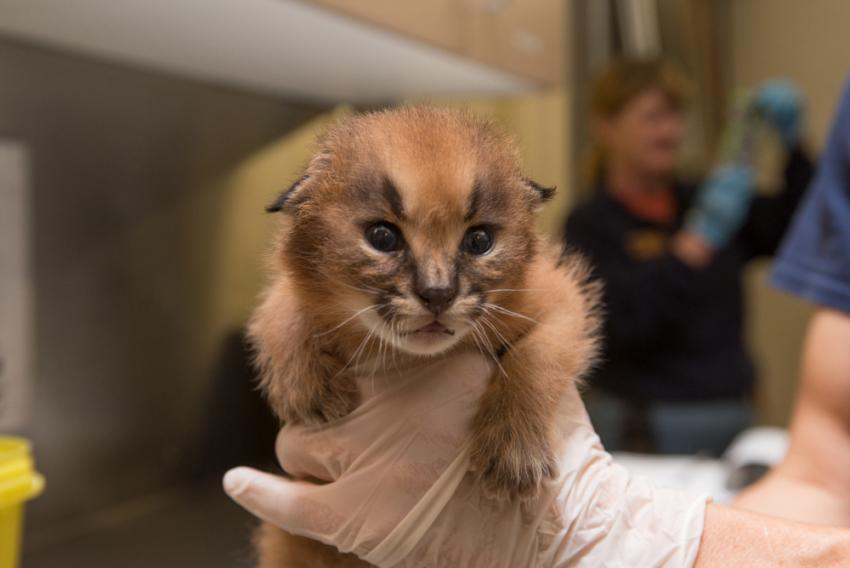 Peggy and her two new kittens are doing well behind the scenes, keepers say

An Oregon Zoo pygmy rabbit was already a big winner in the scientist-led #CuteOff this month, but the zoo doesn't seem to be resting on its laurels. Last week, a trio of 10-day-old cougar cubs at the zoo's vet center caused a minor internet commotion, showing up on animal blogs as far afield as France and Vietnam. And this week, the zoo introduced two more ambassadors of cute: a pair of 2-week-old caracal kittens.

Peggy, a caracal living in the zoo's Predators of the Serengeti area, gave birth to two kittens on Sept. 11 — one female and one male — and today the zoo shared its first video of the young siblings.

Adult caracals are known for their huge black-tufted ears, which help them locate prey — but like all cats, they are born with eyes closed and ears folded down. At their two-week checkup Friday, the female kitten's ears had already popped up, but the male's were still flat against his head.

According to keepers, Peggy and her babies are doing well, with both kittens nursing regularly and starting to move around their behind-the-scenes den box.

"Peggy has been a terrific mom," said senior Africa keeper Laura Weiner. "She's very protective. We put a bunch of straw in her den box as bedding, and she's been covering the little ones up with it, hiding them. Wild cats of all species hide their kittens like that to protect them from predators."

While Peggy and the kittens will be behind the scenes for a while, zoo visitors can still see the kittens' father, Cricket. Cricket was born at the Lory Park Zoo and Owl Sanctuary in South Africa, and moved to the Oregon Zoo in winter 2011. Peggy came to the zoo in 2009 from a conservation center in Mena, Ark.

The Association of Zoos and Aquariums, which coordinates nationwide breeding programs for many of the species housed by zoos, recommended Cricket and Peggy as a breeding pair because the cats are from the same subspecies.

The zoo's caracal habitat, part of the Predators of the Serengeti exhibit, was built with substantial support from community members and organizations like Portland General Electric. The caracals have access to a heated den and a spacious landscape dotted with trees, shrubs, heated rocks and grassy knolls, all of which are enriching for the feline residents.

Caracals live in the woodlands and savannas of North Africa, Southwest Asia and the Arabian Peninsula. While caracals are listed in the category of "least concern" by the International Union for Conservation of Nature, hunting and habitat loss pose risks to wild populations.

Not all cute animals make good pets, and caracals — which can weigh up to 57 pounds and are capable of taking down an impala — have complex care needs that can only be met by people with specialized training at licensed and properly equipped facilities, such as AZA-accredited zoos. Exotic animal ownership laws also vary from state to state. Before purchasing an animal, pet seekers can look up the species on the EcoHealthy Pets website, which ranks pets based on sustainability, invasion threat, ease of care and health risks.