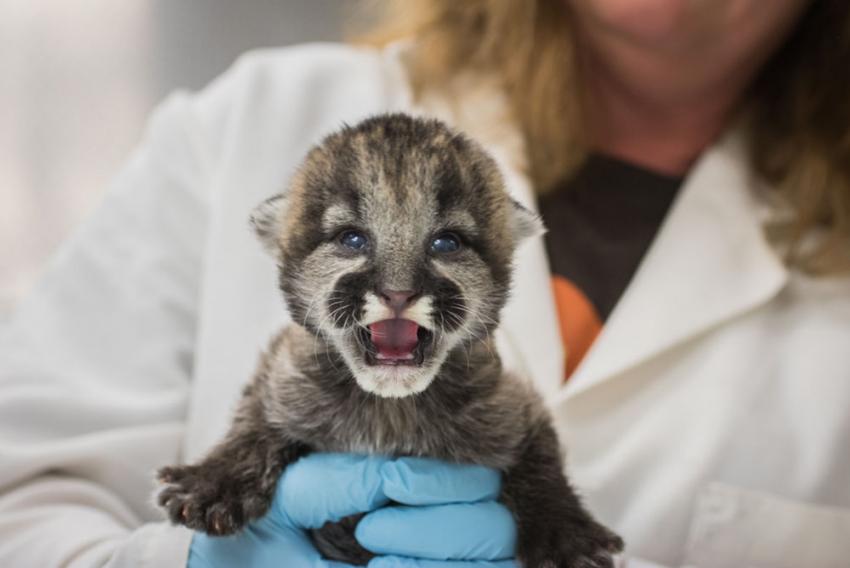 After a brief stay at the zoo's vet medical center, cubs will move on to a new home

Three orphaned cougar cubs — with fuzzy, spotted coats, baby-blue eyes and some surprisingly big voices — have briefly taken up residence behind the scenes at the Oregon Zoo's veterinary medical center.

The 10-day-old cubs — two females and one male — were discovered in Washington state last week. Upon rescuing the orphans, Washington Department of Fish and Wildlife officials quickly contacted Oregon Zoo keeper Michelle Schireman, who serves as the Association of Zoos and Aquariums' species coordinator for cougars.

"Without a mother, young cougars can't survive on their own in the wild," Schireman said. "So I work to find them suitable homes. We have a couple of options we are considering right now, and the cubs should only be in our care for a couple of weeks at the most." 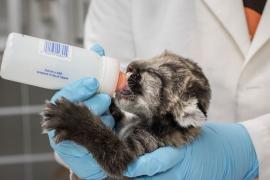 The cubs arrived in Portland Sept. 18, weighing just a pound and a half each. They have yet to cut their teeth, and their eyes are barely open — still cloudy blue and unable to focus — but they have been eating well and are very vocal, according to Schireman.

"They're loud," she said. "When you come to feed them in the middle of the night, you can hear them all the way out in the parking lot."

In 2011, the American Association of Zoo Keepers recognized Schireman with a Certificate of Merit in Conservation for her "outstanding work developing an orphaned animal placement program." As AZA species coordinator, she has found homes for nearly 120 cougar cubs in zoos around the country. Most of the cougars currently living in U.S. zoos are orphans placed by Schireman.

"In most cases, we try to arrange for orphaned cubs to go directly to their new homes," Schireman said. "But in special situations, and depending on whether we have space, we sometimes take care of them at the zoo until their health has stabilized. It's a lot to ask of our staff, but everyone here is incredibly dedicated to helping wildlife. Our vet staff and keepers have been taking shifts to make sure the little ones receive around-the-clock care with bottle feedings every four hours."

Cougars — also known as mountain lions, pumas and (in Florida) panthers — range throughout southwest Canada, the western United States and South America. They weigh from 75 to 150 pounds and have a carnivorous diet both in the wild and at the zoo. Females are either pregnant or raising cubs for the majority of their lives. After three months of gestation, two to three cubs are usually born in a litter and live with their mother for up to two years.