The most ambitious project in Oregon Zoo history is now complete. Elephant Lands, a world-class home for a world-famous elephant family, opens to the public Dec. 16.

Two and a half years in the making, and four times the size of the zoo's former elephant habitat, Elephant Lands accounts for nearly one-tenth of the zoo's total 64-acre footprint. A bridge leading visitors to the new Forest Hall offers a sweeping, panoramic view of the entire project: six acres, extending around much of the zoo's eastern side from the central lawn to the veterinary medical center.

"This new habitat lets elephants be elephants, making their own decisions about how they spend their days and nights."

On Saturday, the elephants began test-driving the final portion of this enormous project: the South Habitat section that connects all the other outdoor spaces as well as the indoor elephant barn and Forest Hall.

"The puzzle is finally complete," said Bob Lee, the zoo's elephant curator. "All the separate pieces are connected, and the elephant family has the run of the place. This feels like a historical moment. It's not just a new space they're stepping into — it's a whole new era of elephant welfare."

To keep the herd comfortable during the building of Elephant Lands, animal-care staff and construction managers devised a phasing plan to gradually expand the elephants' accessible space. The Encounter Habitat opened in February 2014, followed by the North Habitat in April 2015. New indoor facilities — among the largest in the world — opened to elephants in May 2015, and the recently opened South Habitat completes the project and brings all the areas together.

"This is a home for some of the largest and most intelligent land mammals on the planet," Lee said. "We wanted to make sure we did it right. This new habitat lets elephants be elephants, making their own decisions about how they spend their days and nights." 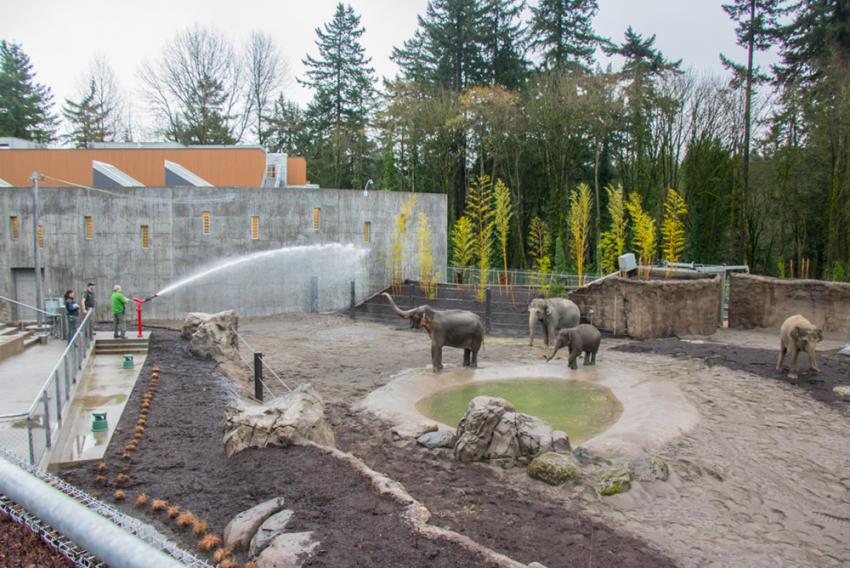 "Our community has created something truly special here," added Heidi Rahn, bond program director. "Ever since the birth of Packy, we've had a strong connection with elephants, and now this world-famous elephant family is getting the world-class home it deserves. In their native lands, Asian elephants are facing extinction — this habitat was designed to inspire generations of zoo visitors to take action on their behalf."

The total budget for the project was $57 million, which — in addition to Elephant Lands itself — included construction of a service access road, rerouting of the zoo train loop and relocation of the zoo's Wildlife Live headquarters. Completed on schedule and on budget, Elephant Lands is the fourth of eight major projects made possible by the community-supported 2008 zoo bond measure promoting animal welfare and sustainability.

In addition to funding from residents of the Metro region, private donors stepped in to contribute additional funds through the Oregon Zoo Foundation's Campaign for Elephants. Gifts to the campaign totaled $5.3 million in support of educational interpretives, technology and features to enhance the habitat, as well as ongoing efforts to inspire the community to care about the natural world.