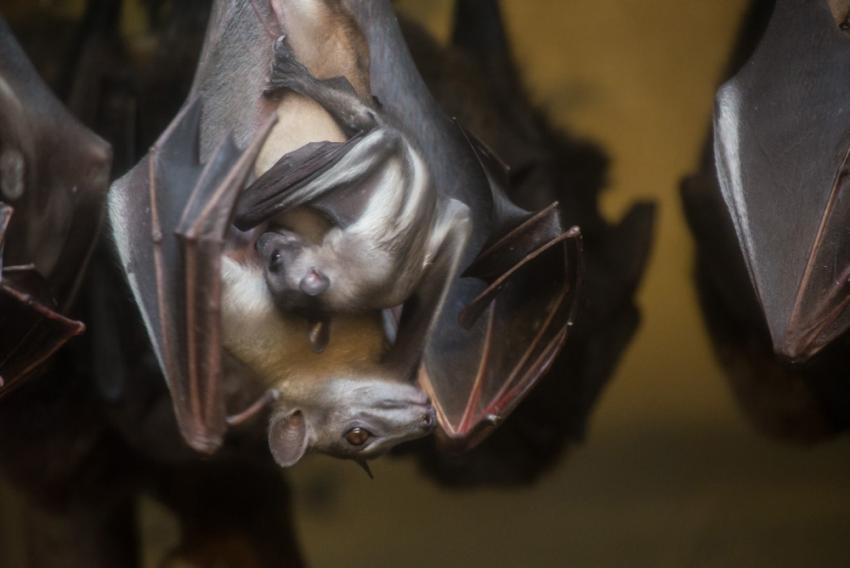 In most cases, "cute" isn't the first word that springs to mind when you think of bats. But a heartwarming new series of mother-and-pup portraits by Oregon Zoo photographer Michael Durham might turn your notions of adorable upside-down.

This month, Durham snapped pictures of one of the zoo's straw-colored fruit bats and her 2-month-old baby engaged in an upside-down snuggle at the zoo's "bat cave," home to three species of Old World fruit bat.

Durham, one of the world's foremost wild bat photographers, has braved everything from quicksand to underground caves to obtain some of the most stunning images of bats in flight anywhere. Until now, though, he's never managed a clear shot of a mother bat and her pup.

"Usually, the baby's features are completely hidden from view," Durham said. "It just looks like there's a big lump attached to the mom. But this pup was peeking around the habitat a bit, and I happened to be in the right place at the right time."

As a child, Durham was terrified of bats, he says. Eventually though, his fear gave way to admiration as he understood more about these secretive animals and their role in the world's ecosystems.

Fruit bats, for example, are herbivores, eating wild fruits and nectar. In doing so, they pollinate flowers and spread seeds throughout the forest — a function so important that without them there would be no rainforest.

"I always say a positive word about bats to anyone who cares to listen," Durham said. "And of course, I'm hopeful that the bat images I have captured educate and inspire new generations of people to conserve and respect all wildlife – even if they are a little bit scary."

People can help protect bats and other threatened wildlife through Small Actions, an easy-to-use online tool launched by the zoo that empowers everyone to become a wildlife defender: www.oregonzoo.org/conserve/small-actions/bats.