By almost any measure, Packy is majestic. Standing 10 and a half feet at the shoulder, he is thought to be the tallest Asian elephant in North America. Keepers liken his lean, rangy build to that of a pro basketball player.

Packy is also the oldest male of his species on the continent, and noticeably slowing down. This morning, to honor his 54th birthday, keepers presented the geriatric elephant with a birthday cake to match his outsize celebrity: a 50-pound whole-wheat confection, frosted with buttercream and decorated with carrots, celery, bananas, apples, pears and sweet potatoes. 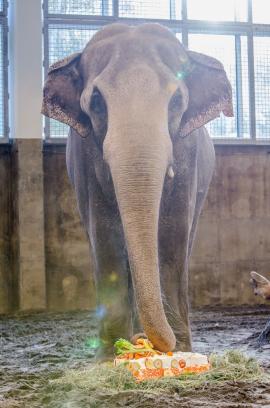 Watching this six-ton senior citizen enjoy his cake inside Forest Hall, elephant curator Bob Lee couldn't help noting the symbolism of the occasion: It was Packy's first birthday in Elephant Lands, the recently opened state-of-the-art habitat at the zoo.

"He is the reason for all of this," said Lee, who has worked with Packy for around 16 years. "He is the connection between the old and the new. Packy was the first elephant born here in 1962, and we designed Elephant Lands specifically with him in mind — both as a comfortable home for him to live out his golden years in, and as a legacy to all he has helped us learn about this amazing species."

Although Packy didn't pause to appreciate the artistry of his cake before digging in, zoo executive chef Jonathan Dempsey and sous chef Jeanne Laravuso, who teamed up to make the enormous confection, take no offense.

"As long as he enjoyed it," Laravuso said. "That's the important thing. The recipe is pretty simple, and except for the frosting it's pretty healthy too — basically just whole wheat flour and some of his favorite fruits and vegetables."

Packy typically gets his cake during Elephantastic, the zoo's annual celebration of pachyderms — held on Feb. 13-15 this year to showcase of the zoo's newly opened Elephant Lands. Over the past few years though, opportunities for zoo visitors to see Packy have been limited, both by construction activity and by his TB status.

In 2013, Packy cultured positive for tuberculosis. Although, he has not tested positive since, he has not been on consistent treatment long enough to share the same space with the other elephants or be on public view.

"Unfortunately, it's not easy for visitors to see him right now," Lee said. "You can catch glimpses of him from time to time in the southernmost yard, which is to the right as you're walking along the pathway into Forest Hall."

Packy has shown no signs of illness from tuberculosis, but treating him has proved challenging, according to animal-care staff.

"We're in a good place right now," said Dr. Tim Storms, zoo veterinarian. "Packy has consistently cultured negative every month since his original diagnosis. His treatment is going better than it ever has, and we're hopeful that he could be reunited with the other elephants by the end of the year."

In 1962, Packy became the first elephant to be born in the Western Hemisphere in 44 years, and he's held a special spot in the community ever since. Packy's birth also helped scientists better understand elephants and opened the door to a new era in elephant welfare.

"At his age, we just want to give Packy the most comfortable life we can," Lee said. "Sometimes it's easy to forget he's a geriatric elephant, but if you think about the time when he was born, it's mind-boggling — Kennedy was president, the Beatles hadn't made any records yet, cigarettes didn't have warnings from the Surgeon General. We've come a long way and learned so much about this species since Packy was born."