All aboard! Free rides May 27 as zoo train resumes service 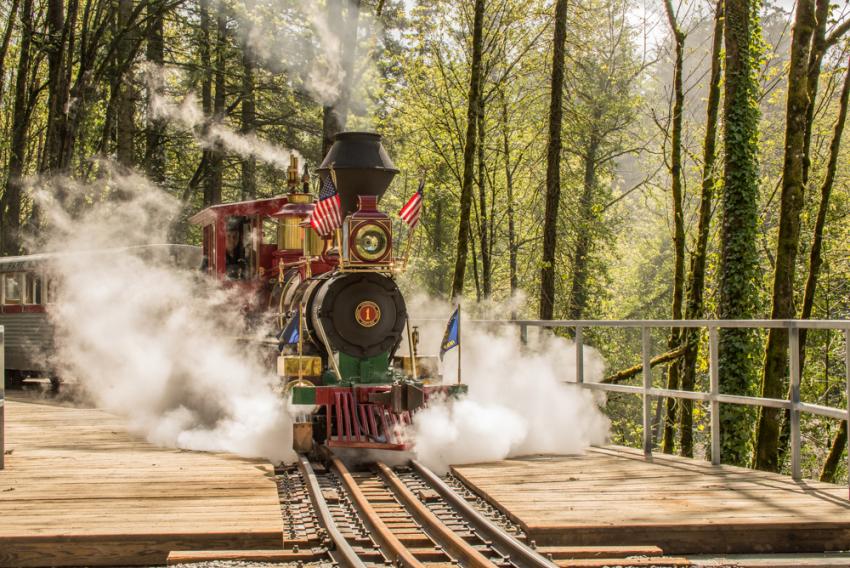 The Washington Park and Zoo Railway will take on its first passengers in nearly six months Friday. Officially, the train won't resume operations until the weekend, but the Oregon Zoo is inviting visitors to ride the rails for free on Friday, May 27.

"We’re thrilled to be bringing the train back in time for summer."

"A new station is in place, and the engineers have been making practice runs," said Craig Stroud, zoo deputy director in charge of business operations. "We’re thrilled to be bringing the train back in time for summer, and we figured a day of free rides would be a great way to thank our community for supporting all the improvements taking place at the zoo."

The railway was temporarily taken out of service in January as major construction began on the zoo's new conservation education center, located adjacent to the train station. The center — the fifth of eight major projects made possible by the 2008 community-supported zoo bond measure — is slated to open in spring 2017.

With the area already a designated construction zone, the zoo took the opportunity to renovate its old train station, which dated back to the late 1950s and had been showing its age. 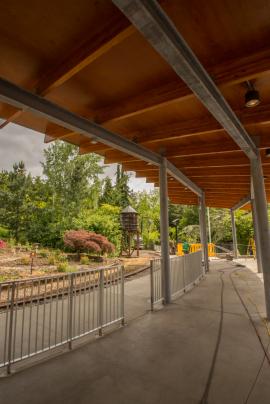 "Depending on the weather, the large permanent canopy at the new station keeps guests shaded or dry as they wait for trains, and the ample queuing area provides a much larger space for them," Stroud said. "Rather than one single-file line leading to the platform, guests now have five different points of entry, which makes for more efficient boarding."

Though not funded by bond money, work on the new station was efficiently bundled into the education center construction project, and gracefully aligns with the center visually, using the same materials and finishes.

In addition to efficiency and aesthetics, sustainability is one of the project's major hallmarks, Shelby says. The station canopy is made of Forest Stewardship Council-certified sustainable wood, with 96 solar panels atop the roof — part of a larger array that will include 635 additional panels at the education center. Together, the 731-panel array will generate enough energy to run the train station as well as other facilities at the education center.

"We're shooting for a net-zero energy operations project," Shelby said. "On an annual basis, we hope to generate as much power as we use."

Hillsboro-based SolarWorld provided panels for the project at cost, and met with zoo contractors to ensure maximum solar capacity.

The zoo's 30-inch-gauge railway line evolved out of plans for a children's train when the zoo moved to its current site in the late 1950s. The Old West–inspired Centennial steam locomotive and the sleek, retro-modern Zooliner both were featured during Oregon's 1959 centennial celebration. A photo from that time shows then-Sen. John F. Kennedy stepping off the train during a staged wild-west train robbery.