Exotic creature, native to Latin America, was found wandering the streets of Eugene

A Chupacabra moved in at the Oregon Zoo this week, arriving in Portland Thursday afternoon and quickly making himself at home in the carnivore ward of the zoo's veterinary medical center.

Unlike the bloodthirsty creature of folklore, however, this Chupacabra is a vegetarian.

"Chupacabra is his name, but actually he's a Patagonian mara, native to Argentina," said Tanya Paul, Oregon Zoo program animal supervisor. "He looks something like a cross between a capybara and a giant jackrabbit."

The extra-large, long-legged rodent was found roaming the streets of Eugene last month and was taken in by the First Avenue Shelter. His owner was eventually identified, but the Greenhill Humane Society, which runs the shelter, arranged for Chupacabra to be transferred to the Oregon Zoo since the species requires specialized care.

"Many exotic animals have complex care needs that are often best met by people with specialized training at licensed and properly equipped facilities, such as AZA-accredited zoos," Paul said. "Responsible pet ownership choices are healthier for people, animals and the environment." 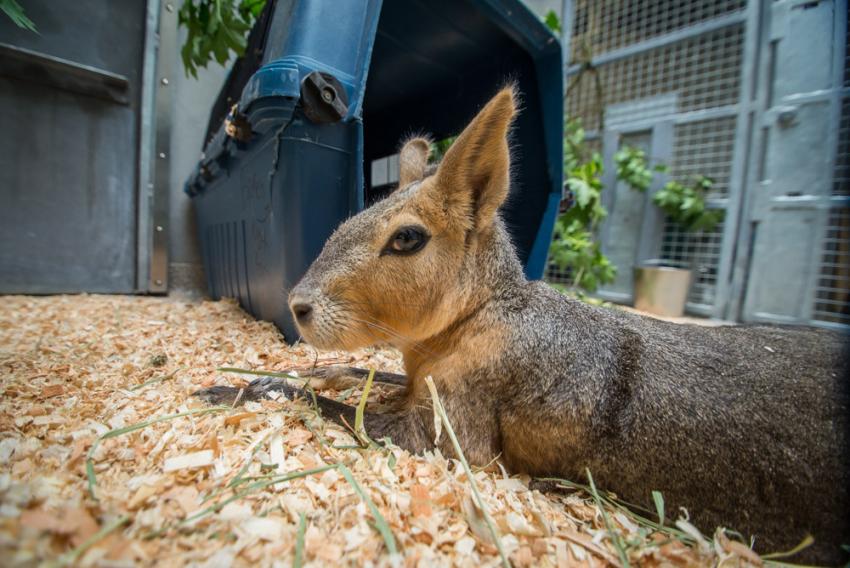 Eventually, Chupacabra will become one of the zoo's ambassador animals, Paul said, but first he will spend a standard 30-day quarantine period at the vet center — particularly important in his case, since not much is known about his medical history.

"He made himself right at home," Paul said. "He came out of his crate in about 20 seconds and immediately began exploring. Right now, he's housed in one of our carnivore wards, ironically enough. It's because of the chewing. As a rodent, he needs to be in an enclosure that he wouldn't chew through."

Paul said the indoor space also has natural light and a retractable roof, so he can have some fresh air and sun when the weather is good.

Once abundant in Argentina's Patagonian Desert, the wild population of maras is in decline due to habitat loss and hunting, according to the International Union for Conservation of Nature, which lists the Pategonian mara's current conservation status as "near threatened."