Two huge African spurred tortoises named Dozer and Shelly are settling into their new digs at the Oregon Zoo — and despite the tortoise's slowpoke reputation, keepers say these behemoths really get around. 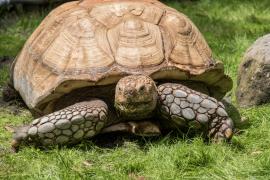 Dozer, a male, and Shelly, a female, tip the scales at around 170 and 90 pounds, respectively. The two tortoises are believed to be around 25 to 30 years old, and came to Portland from New York's Seneca Park Zoo. Visitors can see them most days in the Oregon Zoo's Africa Savanna section.

"They're doing really well in their new habitat," said Shelly Pettit, the zoo's senior keeper for reptiles and amphibians. "They're very active and surprisingly speedy. Dozer did not get his name by napping."

Pettit says the name is actually short for Bulldozer, a tribute to this species' exceptional strength and excavating abilities. A video posted to the zoo's Facebook page yesterday shows him living up to his name, plowing straight into a camera operator before noisily digging into a dish of cabbage and other veggies.

Although African spurred tortoises are bred and sold throughout the United States, Pettit warns not to acquire them as pets.

"Pet stores often sell these tortoises when they're still babies, but they get very large very quickly," Pettit said. "A hundred pounds is a whole lot of tortoise to care for, and these guys typically live 50 years or more. Most people are not able to make a lifelong commitment to their care, and rescue agencies are overwhelmed trying to find new homes for those that have been abandoned."

Each year, thousands of wild animals are captured — often illegally — for the "exotic pet" trade. Many of these animals are injured or perish during transit, and often prove too challenging or dangerous for the average person to care for. Pets can also threaten ecosystems when they escape or are released by owners who can no longer care for them. Responsible pet ownership choices are healthier for people, animals and the environment.

African spurred tortoises are listed as a "vulnerable" species by the International Union for Conservation of Nature and Natural Resources. In addition to collection for the pet trade, the tortoises are threatened by habitat loss and poaching for their shells and other body parts.

Consumers can take a stand against the illegal wildlife trade by avoiding products made from real tortoiseshell, such as barrettes, brushes, ornaments or jewelry. For more information on which wildlife products to avoid, and which to always question, visit the U.S. Wildlife Trafficking Alliance #BuyInformed website.