Conrad, a 31-year-old polar bear at the Oregon Zoo considered to be the oldest male in North America, was euthanized today after veterinarians determined a tumor on his liver was compromising his quality of life. Zoo vets made the decision after it became clear his health was declining and he would not be able to recover.

“Since discovery of a large tumor in May, we have closely monitored Conrad and initiated a process we use for monitoring our animals’ quality of life,” said Tim Storms, the zoo’s lead veterinarian. “Given his advanced age, and the risks and complications of an invasive procedure, we ruled out surgery and have focused on keeping him comfortable. Yesterday, Conrad made it clear that our efforts were no longer working.”

The median life expectancy for polar bears is 20.7 years for males and 24.1 years for females, so 31 is impressive. Conrad was the oldest male polar bear in a zoo or aquarium in North America.

“He was quite elderly, but you would never have known it to look at him,” said Nicole Nicassio-Hiskey, the zoo’s senior marine animal keeper, who has worked with Conrad for more than a decade. “We worked with him daily to keep him healthy, fit and engaged. He was still active and playful, right up until his last few days.”

For the past few years, Conrad had been dealing with age-related arthritis, which zoo staff treated with a regimen of pain-management medications combined with low-impact exercise. Keepers would toss barrels, balls and other toys into the polar bears’ pool to encourage him to swim.

“Conrad was one of the most impressive animals I have ever had the pleasure to work with,” Nicassio-Hiskey added. “I feel so lucky that I was able to have a relationship with him. He really was an important part of our team. He will be missed so much.”

“I feel so privileged to work with this amazing team of zookeepers and veterinarians,” said Don Moore, zoo director. “The strong relationships they had with Conrad and the amazing training and high quality of care that they provided for him was truly inspirational. We knew that this day was coming since his diagnosis but this is still the most difficult part of our job. I know that they will miss him desperately, every day, but they have always been committed to doing whatever was in his best interest, no matter what.”

Polar bears are threatened by climate change, and if current climate warming trends are left unchecked, scientists predict the death of up to two-thirds of all wild polar bears by 2050. Rising temperatures are melting the Arctic sea ice shelf that polar bears use to access to their primary food, ringed seals, and that provides shelter necessary for the species’ survival.

Polar bears have been designated as threatened under the U.S. Endangered Species Act, and the World Conservation Union’s Species Survival Commission has reclassified the polar bear as a vulnerable species and placed it on its Red List. The Red List identifies species facing a high risk of global extinction. 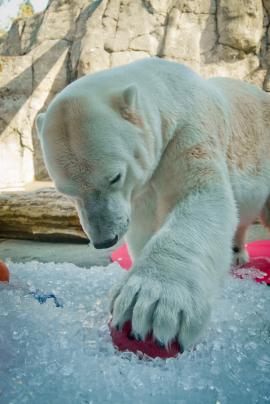 In 2011, Conrad and his sister Tasul became the first polar bears in the world to voluntarily give blood — a significant advance that improves animal welfare, especially during veterinary treatment. After reading about this milestone in The Oregonian, Karyn Rode, a scientist with the U.S. Geological Survey’s Polar Bear Team, contacted the zoo for assistance with the USGS’s Changing Arctic Ecosystems research.

Since then, Conrad and Tasul have helped Rode in her research on how climate change is affecting the diets of wild polar bears. Tasul has also helped the USGS in tackling another climate change mystery by wearing a high-tech collar to track her movements. Polar bears are extremely difficult to observe in the wild, and Tasul’s data is helping researchers develop methods to remotely investigate how these predators are responding to the retreat of sea ice.

“Conrad inspired millions of zoo visitors and made significant contributions to Arctic conservation science,” said Amy Cutting, Oregon Zoo marine life curator. “He was such a great ambassador for his counterparts in the Arctic. Wild polar bears are in trouble, and their future depends on all of us working together to counteract climate change.”

The zoo has recently launched design of a new polar bear habitat, the sixth of eight major construction projects funded by a public bond passed in 2008. The new habitat is scheduled for completion in 2019 and will provide zoo visitors with a view into the ways Oregon Zoo polar bears are contributing scientific data to Arctic conservation research.

Conrad and his twin sister, Tasul, were born Dec. 1, 1984, at the Riverbanks Zoo in Columbia, S.C., and arrived in Portland on Jan. 31, 1986. While the pair had a strong long-term relationship, polar bears are solitary by nature, and keepers expect Tasul will adjust well to her brother’s absence.

Those who wish to honor Conrad and his contributions to polar bear conservation may make a gift in his memory to the Oregon Zoo Foundation’s annual fund or become a Wildlife Partner. Learn about other ways to get involved.