A new chick joined the Oregon Zoo's Humboldt penguin colony this week, and he or she may have a sibling in the next couple days. 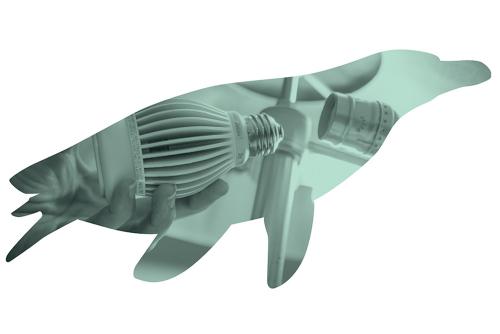 7 ways you can help Humboldt penguins.

"The first hatching went really smoothly," said Gwen Harris, the zoo's senior keeper of birds. "The chick looks healthy, and the parents — Blue and Esquela — are very attentive. They're also sitting on another egg right now, and with any luck a second chick will hatch in a couple days."

Harris said other penguin pairs are sitting on four additional eggs, and she has hopes for several more eggs before the breeding season is over.

Visitors can look for the new arrivals in the spring, once the chicks fledge and begin to explore the rugged terrain of the zoo's penguinarium, which simulates the endangered birds' native habitat along the rocky coast of Chile and Peru.

Until then, Harris says, the young ones will be keeping cozy inside their nest boxes, growing strong on a diet of regurgitated "fish smoothie" provided by their parents. The young penguins' genders won't be known until their first full veterinary checkups take place in a couple months.

The chicks — which look like "fluffy gray plush toys" and can fit in the palm of your hand — will be nearly as tall as adult Humboldts by the spring. They'll still be easy to tell apart by their plumage though: The young birds will be grayish-brown all over and won't develop their distinctive black-and-white tuxedo markings for a couple more years.

Young penguins can swim right away once they fledge — no lessons needed — and visitors should have good views of these sleek sea birds darting through the clear waters of the zoo's penguinarium. In 2012, the zoo completed a much-needed upgrade of the penguinarium's water-filtration system, one of many improvements funded by the community-supported 2008 zoo bond measure aimed at protecting animal health and safety while conserving and recycling water. The upgrade saves millions of gallons each year.

Related links:
Why Humboldt penguins are at risk