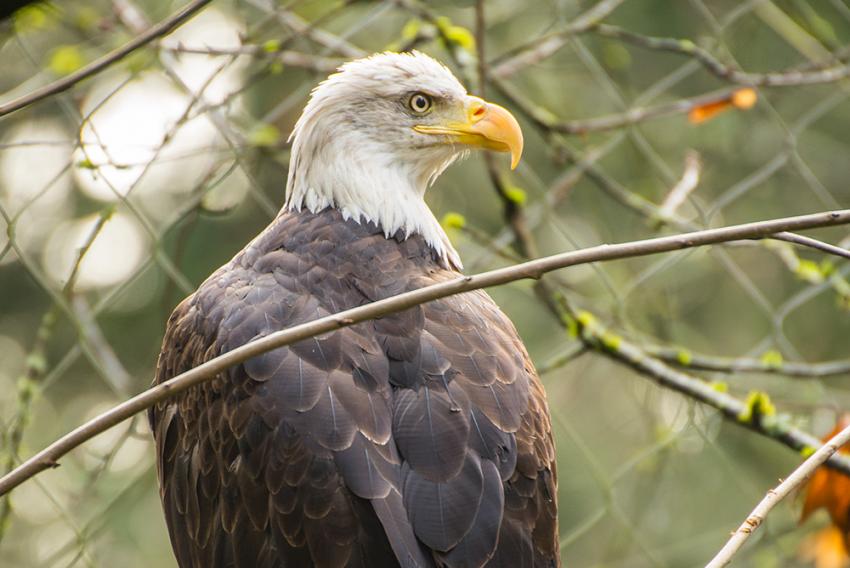 A one-eyed bald eagle has taken up residence at Oregon Zoo after a lengthy rehabilitation in Wisconsin, joining Jack, another one-eyed rescue, in the zoo's Eagle Canyon habitat.

Reetahkac (pronounced Rate-a-kats, Pawnee for eagle), a female, and Jack help zoo visitors learn about the detrimental impacts of lead ammunition on wildlife. 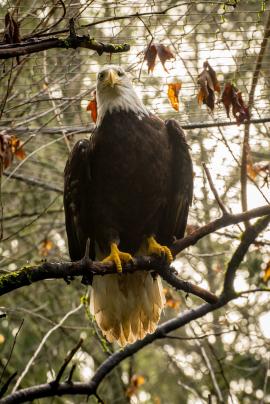 In late February, hikers in Wisconsin's Vernon Wildlife Area spotted the 3-foot-tall eagle on the ground along their trail. Concerned that she might be unable to fly, they called local authorities, who dispatched a rescue team from the nearby Wildlife in Need Center.

An initial exam and a trip to Brook-Falls Veterinary Hospital showed the bird had sustained a deep puncture wound in her left eye, and was also suffering from severe lead poisoning. Wildlife experts believe the puncture, which left Reetahkac blind in that eye, occurred during a territory battle with another eagle. The lead poisoning, they say, most likely came from a meal she ingested around the time of her rescue.

"Thankfully, she was rescued quickly and began treatment before the worst of the lead poisoning affected her central nervous system," said Gwen Harris, the Oregon Zoo's senior bird keeper.

Despite extremely high blood-lead levels, Reetahkac was not yet showing clinical signs of life-threatening toxicity. She underwent five rounds of chelation therapy — a chemo-like treatment that helps remove lead from the body.

Once the eagle's blood-lead levels had reached a clinically safe level, vets performed surgery to remove her injured eye so the wound could heal. Her lack of depth perception would prevent her from hunting successfully and surviving in the wild, so wildlife officials recommended she be transferred to the Oregon Zoo.

The two bald eagles can be distinguished by their eyes: Reetahkac is missing her left eye and Jack is missing his right.

Although lead has been widely eliminated from paint, gasoline and water pipes, it remains the metal of choice for ammunition manufacturers. Eagles and other scavengers can ingest the toxin when they eat the remains of an animal that's been shot with lead ammunition.

In 2015, the Oregon Zoo launched a program to encourage hunters — traditionally some of the strongest supporters of wildlife and habitat conservation — to protect those scavengers by choosing non-lead ammunition. Educators have reached nearly 7,400 people with information about switching away from lead.

"Thanks to intervention, this eagle got a second chance, but its exposure to lead could have been prevented," said Leland Brown, non-lead hunting education coordinator at the Oregon Zoo. "When hunters choose non-lead ammunition, they're helping scavenging wildlife stay healthy by keeping lead out of the environment."