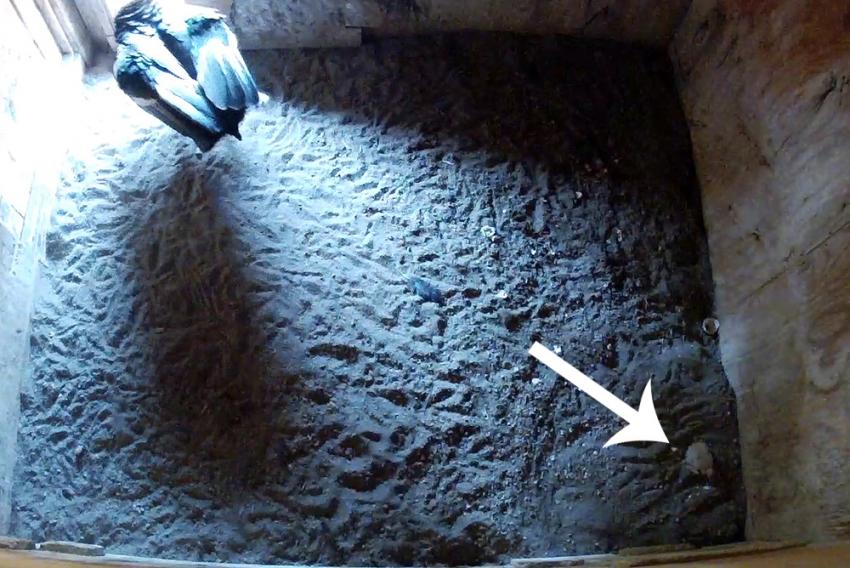 With nine eggs so far, and one more expected, Oregon Zoo is on track for a great year

It's a sure sign of spring: The first two California condor chicks of 2017 hatched at the Oregon Zoo's Jonsson Center for Wildlife Conservation this week, kicking off what looks to be an exceptional year for the condor recovery effort.

Since late January, condors at the offsite facility have been laying the groundwork for species recovery one egg at a time. In addition to the two hatchlings, seven more eggs have been laid this year (five of them confirmed to be fertile) and another egg is expected any time.

The first fuzzy new arrival this year hatched on March 26 to condors No. 465 and No. 290, who also produced the first hatchling of last year's breeding season.

"They've both been very attentive parents," Walker said. "For the first couple of days, No. 465 was even keeping the eggshell under him along with chick."

Condor parents take turns brooding their chicks, Walker said, and for the first couple days, keepers could only catch brief glimpses of the "little white fluff ball" during exchanges. Yesterday though, the parents were both off the chick for a brief time in the afternoon.

"We could see that he was alert, playing with sand and flapping his wings," Walker said. "He already looks much bigger than he did three days ago."

The season's second chick arrived yesterday to condors No. 540 and 492. This is their first time raising a chick, but they are doing well so far, according to Walker.

"The father, No. 540, was sitting on the egg when it hatched," Walker said. "Shortly afterward, he got up and was walking toward the nest room entrance, but the chick started vocalizing so loudly that he immediately came back and resumed brooding."

The chicks will stay with their parents for at least eight months before moving to the Jonsson Center's pre-release pens for about a year and a half. Eventually, they will travel to a wild release site to join free-flying condors in California, Arizona or Baja Mexico. With so few of the birds left in the world, each new chick is vitally important to the species' survival.

The California condor was one of the original animals included on the 1973 Endangered Species Act and is classified as critically endangered. In 1982, only 22 individuals remained in the wild and by 1987, the last condors were taken into captivity in an attempt to save the species from extinction. Thanks to breeding programs like the Oregon Zoo's, condor numbers now total more than 400, with the majority of those flying free.

Since 2003, 63 chicks have hatched at the Jonsson Center, and 47 Oregon Zoo-reared birds have gone out to field pens for release. In addition, several eggs laid by Oregon Zoo condors have been placed in wild nests to hatch. Staff hope the 2017 breeding season will provide another boost to those totals.