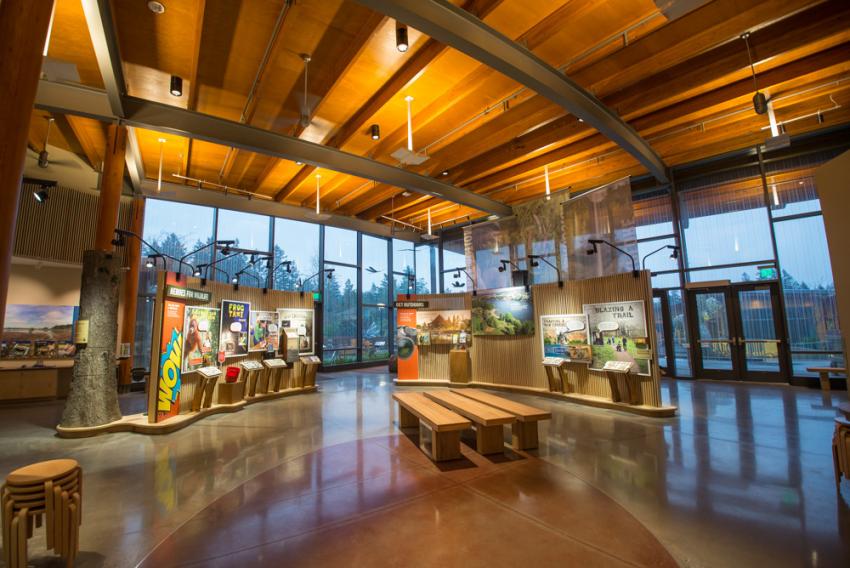 At a meeting of the Metro Council today, the Oregon Zoo Bond Citizens' Oversight Committee praised Metro and zoo staff for their effectiveness in implementing a host of projects made possible by the community-supported bond measure.

"The committee is pleased to report that in 2016, bond funds continued to be spent wisely, bond projects were advanced on schedule and within budget, and overall the bond program is on track to deliver on voter expectations," wrote committee chair Ruth Shelly in a letter introducing the major findings of the citizen group's report.

Among the major projects noted in the report is the new Education Center, which opened in March. The committee commended the zoo for developing partnerships that support its conservation education programming and for integrating sustainability features including more than 700 solar panels, salvaged building materials, bird-friendly glass and a rain-harvest system, to make the new center a teaching tool.

"With three years yet to go in the construction schedule, we are two-thirds of the way through," Shelly wrote. "At this point, it seems significant that the Education Center opens with the theme of 'small things matter.' Individual members of the committee might humbly consider themselves a 'small thing,' but their hours of service added up over seven years is a testament to civic involvement that ensures accountability of the public trust."

The committee congratulated the zoo on honors for Elephant Lands (which opened in 2015), including LEED Gold certification and the Daily Journal of Commerce's Project of the Year award. Other projects noted in the report are Condors of the Columbia (completed in 2014); a state-of-the-art veterinary medical center (2012) and extensive infrastructure upgrades, including a water-saving filtration system at the Penguinarium (2012).

With five major projects now complete, the committee has recommended that the final three projects funded by the zoo bond — improved habitats for primates, rhinos and polar bears — be managed as a single construction project to save costs and increase efficiency. These projects are currently in the design phase and scheduled for completion in 2020.

The committee acknowledged the zoo's success in minimizing disruption to visitors during construction and the smooth transition in executive leadership as incoming director Dr. Don Moore took over in March 2016.

The report highlighted successes in containing costs and improving construction efficiency through the use of an alternative contracting method that brings general contractors into projects early, during the design phase, to help identify risks, provide cost projections and refine the project schedule.

It also noted the zoo's achievements in hiring contractors certified by the State of Oregon's Office for Business Inclusion and Diversity, which works to increase opportunities for minority-owned, women-owned, service-disabled veteran-owned and emerging small businesses to land contracts on publicly funded projects. For the Education Center, 29 percent of the contracted work (by dollar value) went to COBID-certified firms — almost double the project's aspiration goal. The committee encouraged the zoo to keep track of its use of certified design firms as well as construction companies.

The committee also recommended the zoo keep a close eye on cost trends in the industry, as the Portland construction market continues to heat up.