Zookeepers, vets rally to save life of rare baby bat

Keepers rescue newborn rejected by its mom, and vet staff springs into action

A tiny, critically endangered fruit bat that almost didn't live past its first day is now 1 month old and well on the road to recovery at the Oregon Zoo.

Keepers were thrilled when Sara, one of several Rodrigues flying foxes at the zoo's "bat cave," gave birth to a new pup March 10. "Rods," as they're often called in zoological circles, were once considered the most imperiled bat species on the planet, and each birth is considered an important step toward ensuring their long-term survival. 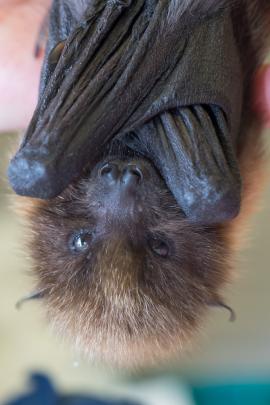 Excitement quickly turned to concern the next day though, when keepers found the tiny bat on the floor of the habitat, apparently rejected by her mom.

"Rods are big and fuzzy, and most of the time they keep their babies tucked up underneath a wing," said Laura Weiner, senior keeper for the zoo's Africa section. "When you see a baby on the ground, that's not a good sign."

The pup — which weighed less than 2 ounces — felt cold to the touch, Weiner said, but otherwise seemed OK. Keepers scooped her up and rushed her to the zoo's veterinary medical center, where she was warmed, given fluids and determined to be in good health.

After several attempts to reunite the pup with her mother were met with rejection, the baby was returned to the vet hospital, where animal-care staff worked in shifts to administer formula feedings. She's out of ICU now, but she'll remain behind the scenes until fall during a long hand-rearing process that currently involves nine bottle feedings a day.

Weiner says the tiny survivor is not only "adorable," but a testament to one of the most inspiring conservation stories in history: living proof of the impact people can have — both positive and negative — on wildlife and species conservation.

"Every birth is significant for these bats," Weiner said. "Forty years ago, the Rodrigues flying fox was perilously close to extinction. The fact that they are here today shows what a difference people can make in helping wildlife."

The species is native only to Rodrigues — a tiny island in the Indian Ocean about 900 miles east of Madagascar — and plays an important ecological role on the island, where few other pollinators or seed dispersers exist. By the 1970s, much of the bats' forest habitat had been cleared, and the species was on the brink extinction. After a cyclone hit there in 1979, only 70 individuals remained, making the Rodrigues flying fox the rarest bat in the world.

The bats found a champion in English naturalist Gerald Durrell, who translocated some survivors to form the nucleus of a breeding colony aimed at repopulating the species. Today, the Rodrigues flying fox population has increased to around 20,000 thanks to 40 years of conservation activity, including the Rodrigues Environmental Educator Project launched by the Philadelphia Zoo in 1998.

The Oregon Zoo began housing "Rods" in 1994, and has raised more than 40 pups since then, periodically sending bats to other zoos as part of the Rodrigues flying fox Species Survival Plan. SSPs are Association of Zoos and Aquariums programs to ensure species that are threatened or endangered in the wild have sustainable populations in zoos and aquariums.