Sharp-eyed visitors to the Oregon Zoo may spot a couple of tiny, furry and objectively adorable new arrivals in the Fragile Forests area this month. Two cotton-top tamarin babies made their zoo debut recently, riding through the habitat on the backs of their parents, Mariposa and Carl.

Cotton-top tamarins, named for the striking crest of long white hair on their heads, are among the world's smallest primates. In contrast to their 150-pound chimp neighbors, adult tamarins usually weigh less than a pound — about the size of a squirrel.

"The babies are growing fast," said curator Becca Van Beek, who oversees the zoo's primate area. "They're a little over 3 weeks old. Mom and dad have been keeping them close, but they're alert and curious. Now that they've opened their eyes, they should be easier for visitors to spot." 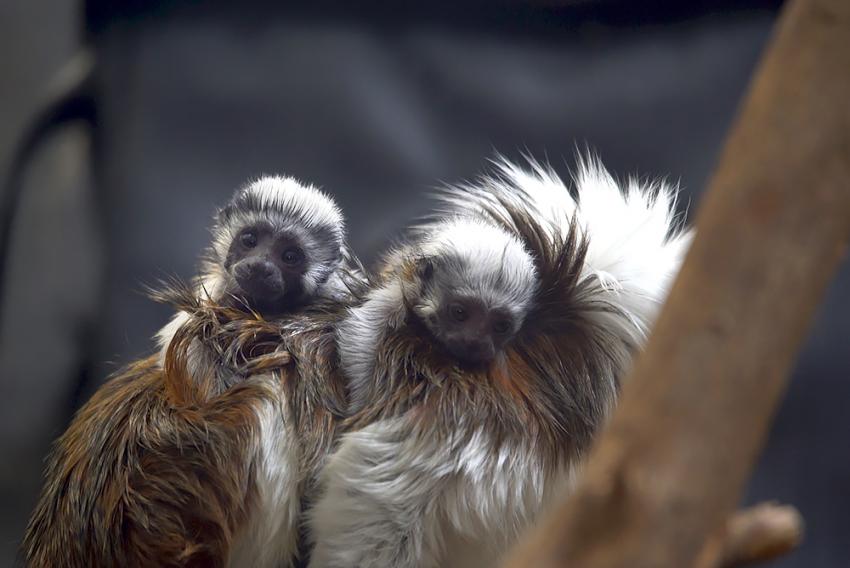 Keepers have named the pair Grillo and Mariquita (Spanish for cricket and ladybug) as an homage to their mom, Mariposa (Spanish for butterfly). Animal-care staff know at least one of the babies is female — she had a vet visit early on after taking a spill in her enclosure. The other's gender is unknown pending the pair's first full health checkup.

"We hope these two will serve as inspiration for people to get involved and help cotton-tops," Van Beek said. "This is a species that is sharply declining in the wild, but hopefully we can start a new chapter in their conservation."

Cotton-top tamarins are considered critically endangered in their native Colombia, where an estimated 75 percent of their original habitat has been destroyed over the past 20 years. The remaining population of roughly 6,000 cotton-tops is threatened by continued deforestation, even in protected areas.