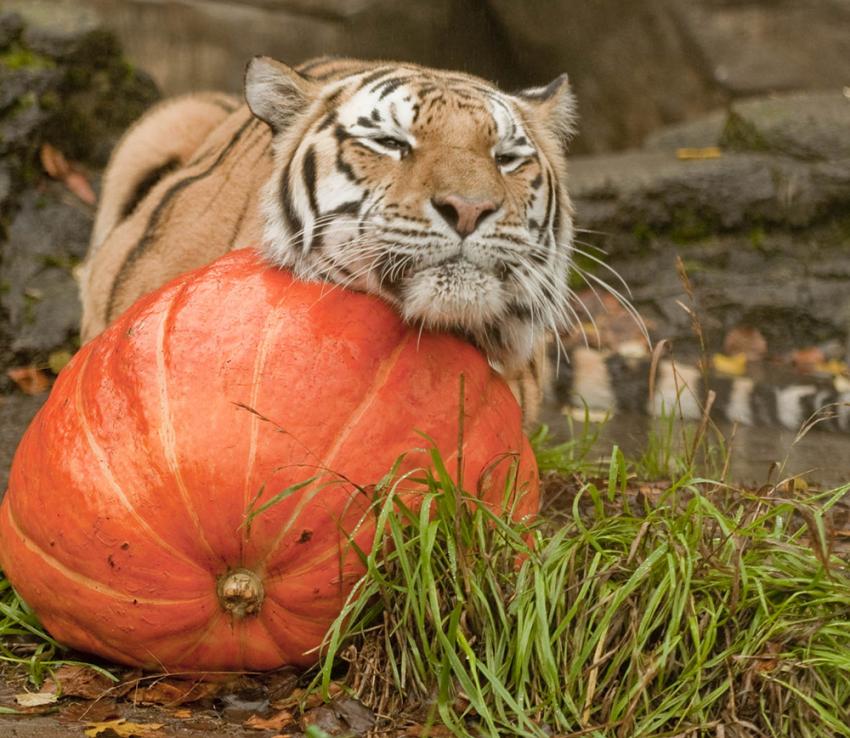 What do tigers want for their birthday? Meat!

Mik — looking appropriate for the season in his customary orange and black stripes — is the oldest Amur tiger in any zoo accredited by the Association of Zoos and Aquariums and is considered among the oldest of his species on the planet. The zoo's animal-care experts dedicate time to keep him active as he ages.

Members of the zoo's volunteer enrichment team created the holiday-themed birthday items, while keepers and zoo veterinarians planned the contents. The enrichment items — all made from nontoxic materials — are designed to encourage the tiger's natural sensory, predatory and exploratory behaviors.

Mikhail was born on Halloween 1998 at the John Ball Zoological Garden in Grand Rapids, Mich., and moved to the Oregon Zoo on Sept. 12, 2000.

"Mik's three years past he median life expectancy for male Amur tigers, which is 16 years," said senior keeper Nicole Nicassio-Hiskey, who's now worked with the tiger for longer than that. "He's still healthy and playful though. We work hard to make sure he stays active and engaged."

Nicassio-Hiskey said the animal-care staff frequently adds new enrichment items into Mikhail's environment to encourage natural behaviors. This is especially important during his golden years, she said. In recent years, keepers have trained Mik to play "soccer" — batting and chasing a big plastic ball around the moat surrounding his habitat — to help keep the 310-pound cat active as he ages.

While Mikhail is doing well, his wild counterparts are imperiled by habitat loss and poaching: Around 550 are believed to remain in their home range. The Amur tiger species derives its name from the Amur River, which runs through the region of southeast Russia to which this subspecies is native.