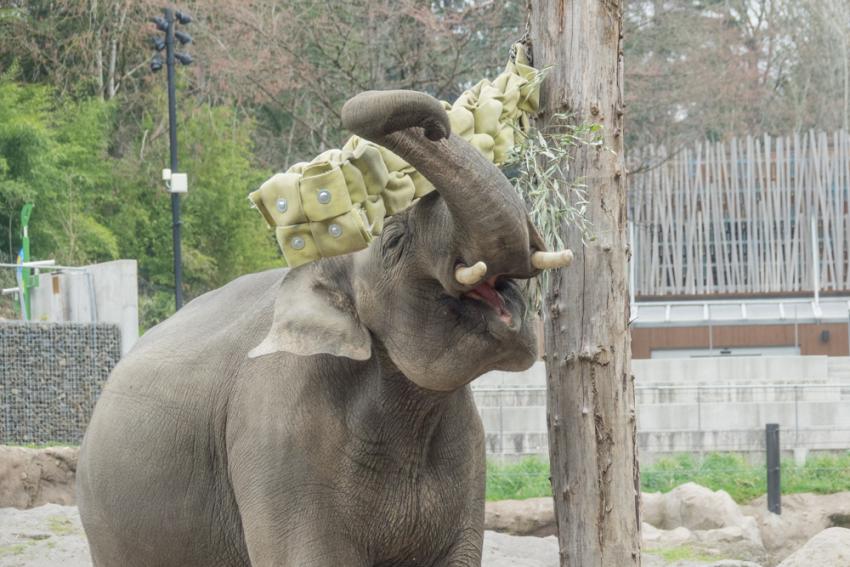 The Oregon Zoo elephant family is in for a treat — but they'll have to work for it. A creative new feeder, made from donated fire hose and mounted high upon a large wooden pole, made its debut in Elephant Lands this week. It's stuffed full of bamboo, a favorite snack, to encourage the elephants to reach up with their trunks.

"The type of reaching they're doing with the bamboo feeder is really beneficial," said Bob Lee, the zoo's elephant curator. "It develops the muscles in the top of their head, which are critical to their overall health."

Those muscles, which reach through the trunk to the top of the head, help elephants stand up and move around more easily. The new feeder also encourages interaction among the herd — earlier this week, siblings Samudra and Lily used it to play their own version of elephant tetherball.

The bamboo feeder is made from sections of fire hose woven together like a large, stretchy friendship bracelet. Oregon Zoo volunteers had the idea after creating a similar — but taller — enrichment device in the giraffe habitat. They thought the elephants might like a feeder they could really sink their trunks into.

"So far, they seem to love it," said elephant keeper Tarah Bedrossian. "Each of the elephants has had a chance to interact with it, and they all used their trunks to reach up and grab the bamboo. It looks like they're having fun too."

The feeder is designed to hang from a pole so the elephants have something to spar with and rub on. The elephant team started with a longer version that hung closer to the ground, but the elephants enjoyed it so much they pulled the firehose to more than double its length. The latest version uses half the length of firehose so the elephants can stretch it out safely.

The new feeder is one of several interactive dining opportunities in Elephant Lands, which opened at the Oregon Zoo in 2015. The herd also has access to unpredictable timed feeders throughout their habitat, which encourage natural foraging behaviors.