Mei Mei, a furry 3-year-old tree dweller, is settling into her new home

What's black and white and red all over? Mei Mei the red panda! The fluffy 3-year-old arrived at the Oregon Zoo earlier this month, and is already making herself right at home in her new habitat.

"We're so excited to have Mei Mei here," said keeper Sara Morgan. "She's very outgoing and curious — she poked her nose out and started exploring right away."

Mei Mei's new home is in the zoo's former Amur leopard habitat. To prepare for her arrival, her care team remodeled the space to accommodate a tree-dwelling, bamboo-eating red panda by adding many branches and leafy plants, along with a bubbling pond and lots of room to climb. To keep her cool in hot weather, they added some refreshing misters and an air-conditioned den box.

Keepers say Mei Mei has full access to her habitat now, but she may not be visible all the time.

"Red pandas are known for their climbing ability, and Mei Mei is no exception," Morgan said. "If you visit her at the zoo and don't spot her right away, be sure to look up — she can often be found lounging in the trees."

Morgan says Mei Mei also spends a fair amount of her day napping, and might be snuggled up in her den box at times. 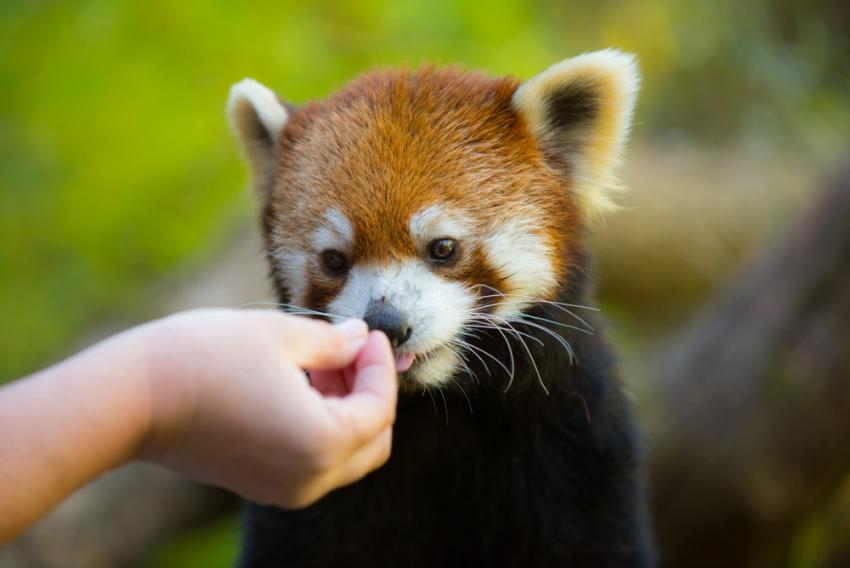 Wild red pandas are solitary animals, spending most of their time alone or in small groups. Mei Mei is the first red panda to arrive at the Oregon Zoo, but keepers hope to welcome another in the coming months.

Red pandas are an endangered species with populations declining by about 50% in the past 20 years. While exact numbers are uncertain, there could be as few as 2,500 left in the wild. In addition to habitat loss and fragmentation, they are also face threats from poaching and the illegal wildlife trade. Accredited zoos are participating in coordinated breeding programs to help preserve them.

Mei Mei came to Oregon on a recommendation from the Species Survival Plan for red pandas — a cooperative program among zoos that helps create genetically diverse, self-sustaining populations to guarantee the long-term future of animals. These SSPs also support relevant field projects, research and public education to help prevent animal endangerment and extinction.