The ancient, eel-like fish are settling into the Great Northwest habitat

The Oregon Zoo's newest residents are also its oldest. Five Pacific lamprey moved into the Cascade Stream building in the Great Northwest area earlier this month, and the ancient fish are making themselves right at home. Older than dinosaurs and even trees, this 400-million-year-old native species is an important part of the history and culture of the Pacific Northwest.

"We're thrilled to welcome Pacific lamprey to the Great Northwest," said Shelly Pettit, the zoo's senior fish keeper. "It's a great opportunity for people to see them up close and learn about this unique species."

The Pacific lamprey is an eel-like fish with a jawless mouth, third eye and no scales. Since the zoo's lamprey can often be seen suctioned onto the glass of their habitat displaying rings of sharp teeth, it's no wonder Pettit and the rest of the lamprey care team like to point out the slimy fish's "cute" factor.

"Lamprey have a lot of charm once you get to know them, even if they aren't your typical cuddly critter," Pettit said. "We've been saying 'the cuteness is coming' to get visitors ready to meet these fish. The cuteness is here now, and it's been really fun to introduce people to a different type of adorable animal."

The five Pacific lamprey came to the zoo from the Confederated Tribes of the Umatilla Indian Reservation as part of a tribal led effort which collects lamprey that are returning to fresh water below the three lowest dams on the Columbia River. Their new habitat in the Cascade Stream building was paid for in part by the U.S. Fish & Wildlife Service. When the fish are ready to spawn, the tribal team will transport them to their original range on tributaries of the upper Columbia River and the Snake River. 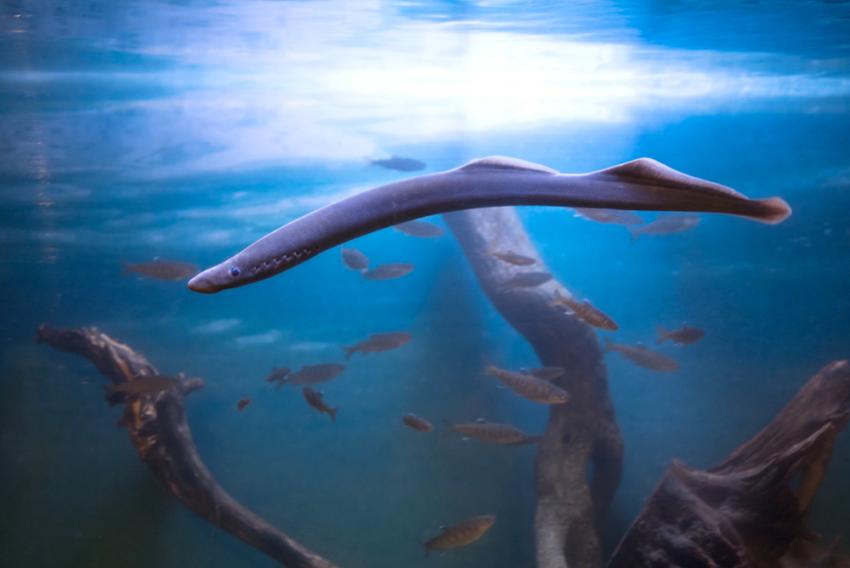 Pacific lamprey have survived three ice ages and five mass extinctions, but in the past 70 years their numbers have declined due to a combination of habitat loss, climate change and lack of food. Now designated as a Species of Concern by U.S. Fish & Wildlife Service and by Oregon's and Washington's departments of Fish & Wildlife, the lamprey are disappearing from their native ranges in the Pacific Northwest.

Native American tribes are collaborating with Federal, State and local agencies to aid Pacific lamprey recovery. These groups are installing passage structures, removing dams to ease passage and restoring damaged streams to help lamprey spawn and rear young. By moving lamprey to areas where they used to live — above the dams along the Columbia — they allow the industrious Pacific lamprey to rebuild their own habitat.