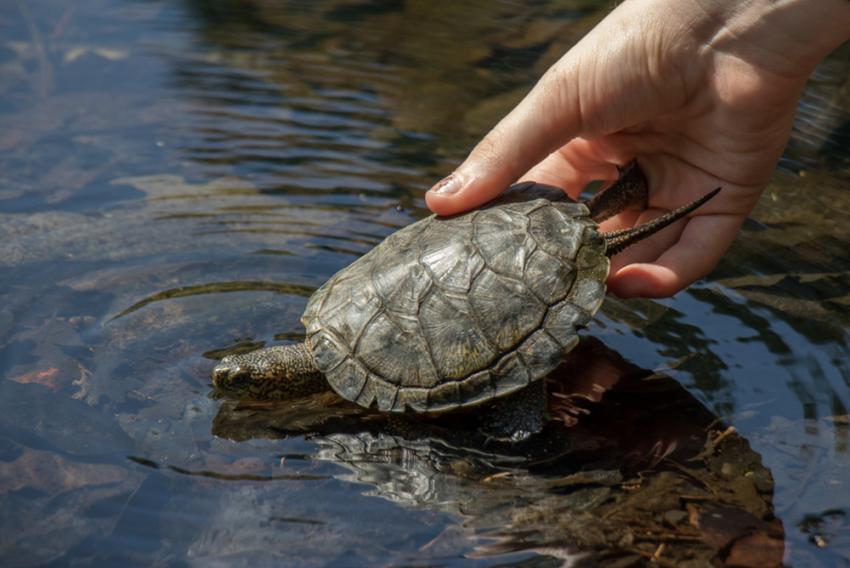 Summer is winding down in Portland, and for 16 western pond turtles reared at the Oregon Zoo that means it's time to go home. With the help of volunteers and local wildlife agencies, the zoo returned the endangered reptiles to the wild at the Columbia River Gorge.

Since last spring, the turtles basked in the warmth and light of a simulated summer at the zoo's conservation lab, growing large enough to have a fighting chance in the wild. Now they're ready for the real thing.

"Here at the zoo, the turtles don't go into hibernation," said senior keeper Shelly Pettit. "They experience summer year-round, and in less than a year grow to about the size of a 2- to 3-year-old wild turtle. This gives them a much greater chance of surviving to adulthood."

Keepers prepare the turtles for life outdoors by helping them learn to hunt for food and giving them plenty of time outside to acclimate to changing temperatures. Once the turtles reach about 50 grams (a little less than 2 ounces), they're taken to the Columbia River Gorge where a team of volunteers and conservationists return them to their natural habitat and monitor them for safety.

"When the young turtles are this big, they're able to avoid predators that threaten them, like non-native bullfrogs," Pettit said.

The biggest threat to fragile baby turtles has been the bullfrog. Native to areas east of the Rockies, this nonindigenous frog has thrived throughout the West, driving pond turtles and a host of other small, vulnerable aquatic species to the brink of extinction.

As part of the Western Pond Turtle Recovery Project, conservationists "head-start" newly hatched turtles gathered from wild sites, nurturing them at the zoo for up to a year. In one study, scientists estimated that 95 percent of the turtles released back to the Gorge survive annually.

"We've been doing this for more than 20 years now, and we feel we've been successful in preventing extinction," said Dr. David Shepherdson, Oregon Zoo conservation scientist. "We've made the first step toward recovery — but we're not there yet."

The turtles were released into two different ponds in the Gorge last week, and at each location they were greeted by larger, older western pond turtles basking in the sun — a great sign for the newcomers. Each of the 16 turtles entered the water and quickly swam toward their new home.

The western pond turtle, once common from Baja California to the Puget Sound, is listed as an endangered species in Washington and a sensitive species in Oregon. Two decades ago, western pond turtles were on the verge of completely dying out in Washington, with fewer than 100 turtles left in the state. Since then, more than 1,500 zoo-headstarted turtles have been released.