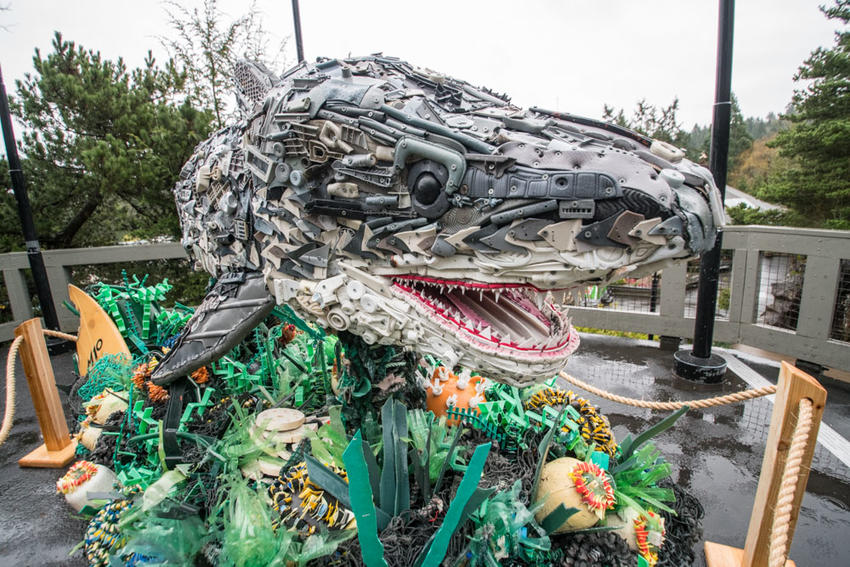 This weekend is the last chance for Oregon Zoo visitors to take in "Washed Ashore: Art to Save the Sea," an exhibit of giant sea-life sculptures made from ocean debris, which debuted at the zoo a year ago and will be leaving after Jan. 18.

From Chompers the Shark, who greets visitors on the boardwalk, to Hugo the Humpback Whale, who can be spotted near the concert lawn, each sculpture is made from materials found along the coastline in the hopes of raising awareness about plastic pollution in our oceans.

"These sculptures are amazing just to look at, but they're also intended to inspire thoughts about our impact on ocean habitats and how we can and help marine life," said zoo education manager Kimm Fox-Middleton.

The sculptures were designed by artist and educator Angela Haseltine Pozzi at her studio in Bandon, Ore. She creates each piece using debris collected on the beaches of Oregon, and assembles them in her studio with the help of thousands of volunteers.

Other sculptures in the exhibit include a fish made entirely from flip-flops, a sea jelly bloom created with plastic water bottles, and a seal named "Lidia" for the plastic lids used in her design. Each sculpture is larger than life and brings with it a potentially life-saving message for the creature that inspired it.

One piece, a giant California condor, was constructed specifically for the Oregon Zoo and will remain as a permanent display when the rest of the exhibit leaves.

Nearly 9 million tons of plastic enter our oceans each year, and that number is expected to grow by 2025. All of this plastic poses a threat to the majority of sea turtle, marine mammal and seabird species that call those oceans home, whether by ingestion or entanglement. Turning the tide of plastic consumption is a daunting task, but even small efforts can make a big difference.

"Washed Ashore: Art to Save the Sea" is presented in partnership with the Oregon Zoo Foundation and Metro's Waste Prevention and Environmental Services team. The sculptures are located throughout the zoo, and viewing is included with zoo admission.