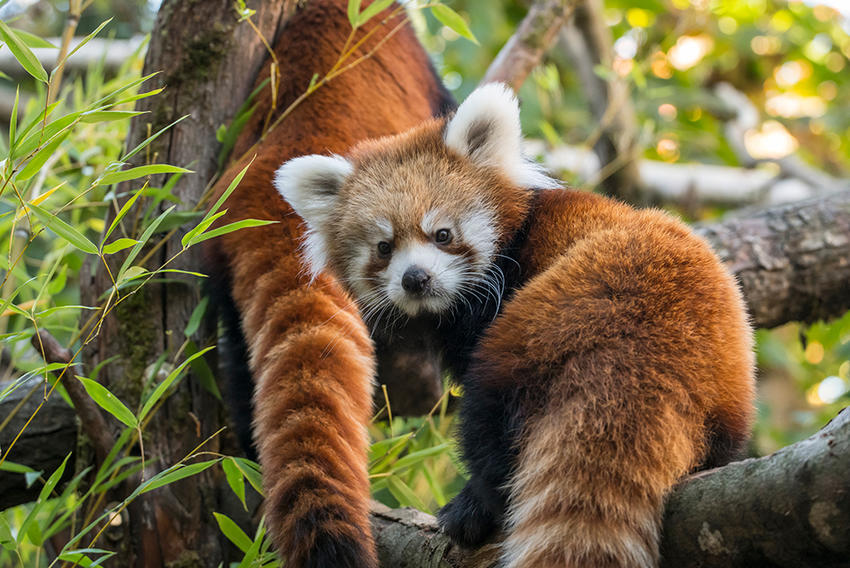 They grow up so fast.... Last June, in a year when smiles were in big demand, Mei Mei the red panda surprised Oregon Zoo fans by giving birth to a tiny cub.

Red panda cubs are born blind, their eyes only opening after a few weeks, and they don't leave their maternity den for a few months. But Pabu, as the cub was named, proved quite a handful once he emerged. Nicknamed the "Prince of Pounce," the young red panda earned a reputation for surprising Mei Mei with playful ambushes.

Now a handsome — and still somewhat rambunctious — young adult, Pabu will soon be moving with Mei Mei to a new home at ZooMontana in Billings. The pair is expected to depart for "big sky country" in early March. The last day to see them at the Oregon Zoo will be Sunday, March 7.

"It's been so much fun to watch Pabu grow, and to see the way Mei Mei has taken care of him," keeper Sara Morgan said. "The timing for this is right, but we're really going to miss them."

The move is necessary, Morgan said, because little Pabu is growing up.

"Wild red pandas are solitary except during breeding season, and the males are territorial," she explained. "Pabu's getting too old to stay with his dad now, but he's still too young to venture off without mom."

While it's hard to see Pabu and Mei Mei go, keepers are happy the pair will have a good home at ZooMontana. Their new habitat, nestled among the zoo's many large cottonwood trees, features two yards with lots of climbing opportunities.

"The staff at ZooMontana have a lot of experience caring for this species," Morgan said. "Last year, they had to say goodbye to their beloved 22-year-old Taylor, who was believed to be the oldest red panda in the world. I'm sure Pabu's youthful energy will keep them on their toes."

Mei Mei and Pabu's move is taking place on a recommendation from the Association of Zoos and Aquariums' Species Survival Plan for red pandas — a cooperative program that helps maintain a genetically diverse, self-sustaining population to guarantee the long-term future of these animals.

Though they share part of their name with giant pandas, red pandas are in a class all by themselves: The sharp-toothed, ring-tailed omnivores are the only members of the Ailuridae family. Found in the montane forests of the Himalayas and major mountain ranges of southwestern China, their striking red, white and black fur provides camouflage in the shadowed nooks of the trees amongst reddish moss and white lichens.