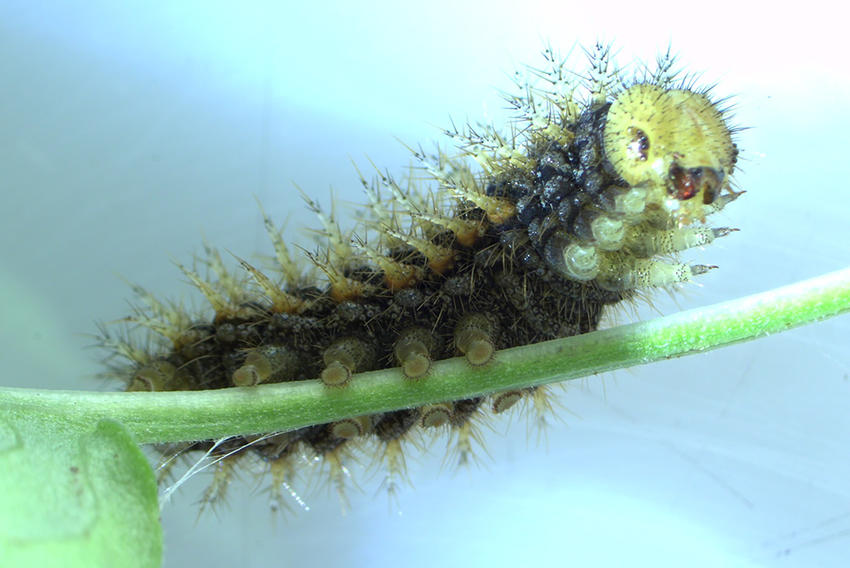 For hundreds of the Oregon Zoo's tiniest residents, naptime is over.

Zoo conservationists are rousing more than 500 Oregon silverspot larvae from their winter dormancy this month, transferring the very hungry caterpillars into protective containers at the zoo's butterfly conservation lab, where they are currently munching on fresh leaves following a 7-month snooze.

"We've had a 98% survival rate of caterpillars coming out of diapause this year, which is the best we've ever seen," said Travis Koons, who oversees the zoo's butterfly recovery efforts. "It's a testament to rigorous protocols and painstaking attention of our care staff."

Over the coming months, zoo staffers will join biologists from the U.S. Fish and Wildlife Service to release the silverspots at sites along the Oregon coastal range, helping to stabilize declining populations of this threatened species.

The zoo-reared caterpillars will complete their development in the wild, first turning into chrysalides and then — over a span of warm, sunny days — emerging as adult butterflies and unfurling their distinctive and colorful wings.

"The Oregon silverspot is one of our region's most beautiful, and most imperiled, butterflies," Koons said. "If it weren't for this collaborative recovery effort, three of the five remaining populations would likely be extinct today."

Once common in coastal grasslands from Northern California up into British Columbia, the Oregon silverspot is listed as threatened under the federal Endangered Species Act. Just five isolated populations remain: four in Oregon and one in California.

Release sites for the silverspots are chosen based on the presence of a rare flower: the early blue violet, which is the main food source for the caterpillars as they mature into adult butterflies. The Oregon coastal range is one of the few remaining areas where early blue violets grow in large enough quantities to sustain a butterfly population.

At the zoo conservation lab, the ever-munching caterpillars are fed early blue violet leaves harvested by inmates at Coffee Creek Correctional Facility as part of a collaboration with the U.S. Fish and Wildlife Service and the Institute for Applied Ecology.

Funding for the zoo’s butterfly conservation lab is provided by the USFWS Cooperative Endangered Species Conservation Fund. Additional support comes from the Oregon Zoo Foundation’s $8.5 million Heart of the Oregon Zoo campaign, which is currently raising funds to support the zoo’s efforts in advancing animal welfare, conservation and education. To learn more or to make a gift, call 503-220-2493 or email foundation@oregonzoo.org.