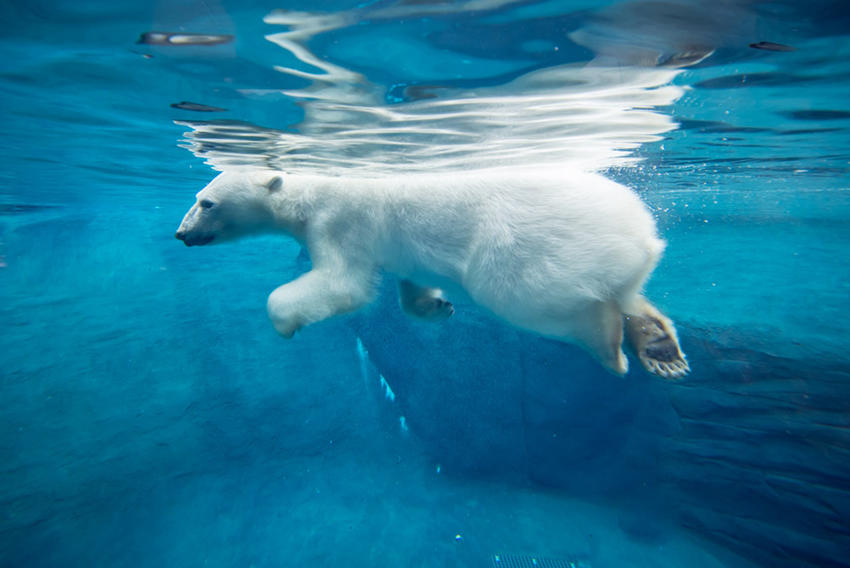 “Polar bears are notoriously difficult to study in the wild,” said Amy Hash, who supervises the Oregon Zoo’s marine life area. “They live in one of the harshest environments on the planet, and observing their behavior is just about impossible.”

To help, zoo polar bear Nora has been beta testing the “Burr on Fur” — a prototype tech innovation designed by 3M in partnership with Polar Bears International to give conservation scientists a better way to track wild bears in the Arctic.

Traditionally, scientists have used satellite collars to follow polar bears, but those only work on adult females.

“Adult males can’t be collared because their necks are as wide as their heads, and young bears grow too quickly to be collared,” said Geoff York, senior director of conservation at Polar Bears International. “The devices designed by 3M represent a major potential step forward — they could be used on all types of polar bears and would allow us to safely obtain critical data.”

Zoo caregivers affixed the “techcessory” to her fur — like a heavy-duty barrette — during a veterinary exam last week. The device is meant to fall off on its own eventually, but with an active bear like Nora, it only lasted several days. Researchers are looking for something that can stay with wild bears for a longer period of time and are trying out different ways to attach the device.

“Nora’s a great beta tester,” Hash said. “The way she dives and splashes really helps evaluate how effective a technology like this will be. We hope to try again with another ‘burr on fur’ once there’s another good opportunity. We’re excited to continue collaborating with our conservation partners, and this is a great way for guests to see some of that important work in action.”

This isn’t the first time Oregon Zoo bears have lent a helping paw to science. Amelia Gray was also outfitted with a Burr on Fur in 2021, just before moving to Portland. And Nora has enjoyed time in a swim flume designed to help scientists understand the caloric requirements of wild polar bears. Last year, the pair helped scientists test a new “bear laser” — scanning technology that could provide a safe, non-invasive way to monitor bears in the wild.

“We still have gaps in understanding how climate change is affecting wild polar bears, and it’s essential that the bears in human care help scientists learn more about their species,” said Polar Bears Interational’s vice president of conservation Amy Cutting. “Zoo bears are perfect candidates to help because they already participate in many health-care behaviors voluntarily and seem to find those experiences enriching.”

Indeed, much of today’s zoo-based polar bear science has its roots in animal-care advances at the Oregon Zoo, according to Cutting. In 2012, polar bears Conrad and Tasul became the first of their species to voluntarily give blood. The breakthrough was a huge in terms of advancing animal well-being and veterinary care, and it also opened the door to other possibilities.

A news story about this milestone led polar bear scientist Karyn Rode to contact the zoo for assistance with her Arctic research. Polar bears are extremely difficult to observe in the wild, and Dr. Rode, a biologist with the U.S. Geological Survey’s Changing Arctic Ecosystems initiative, believed the zoo’s training advances presented a unique opportunity to fill critical knowledge gaps.

Tasul helped Rode learn how climate change was affecting the diets of wild polar bears, then assisted one of her USGS colleagues by wearing a high-tech collar to help calibrate tracking collars deployed on wild bears.

All these collaborative efforts couldn’t come at a more urgent time. As climate change reduces Arctic sea ice, polar bears struggle to find and catch seals, making it harder for them and their cubs to survive. The species is classified as threatened under the U.S. Endangered Species Act, and the International Union for the Conservation of Nature’s Species Survival Commission has designated the species as facing a high risk of global extinction.