Visitors can see the prickly pair over spring break 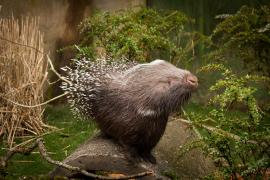 Stuck for something to do over spring break? Make it a point to visit the Oregon Zoo’s Africa Rainforest exhibit, where two African crested porcupines, sporting foot-long spiny quills, are settling in.

The prickly pair has been adjusting well, according to keepers, who are working to contain the porcupines’ excitement over their new digs.

“When porcupines are scared, or even when they’re very excited, they will raise and fan out their quills as a defense mechanism,” said Asaba Mukobi, senior Africa keeper. “Thankfully, by slowly acclimating them to their new exhibit, no one has been stuck by an over-eager porcupine.”

The porcupines – male Sharpie and female Nolina – arrived here in August from Chicago’s Brookfield Zoo. They lived in the zoo’s new Veterinary Medical Center while staff renovated their habitat to accommodate them.

“We planted new trees and grass, added heating pads for the winter and created some nice new hiding areas for them,” Mukobi said. “I think they’ll enjoy their new home.”

African crested porcupines are the largest porcupine species in the world and the largest rodents in Africa. They range from 25 to 30 inches long and can weigh more than 40 pounds. Among their distinguishing features are black-and-white quills on the neck and back that can grow up to a foot long.

What: A chance for media to preview the Oregon Zoo’s new “prickly pair” — African crested porcupines Sharpie and Nolina — who will go on exhibit to the general public this weekend.
When: Friday, March 23, at 10:30 a.m.
Who: Africa curator Jennifer Davis and senior Africa keeper Asaba Mukobi will be on hand to introduce the porcupines.
Where: Meet Hova or Tinsley at Gate D.