Be very, very quiet – the zoo is hunting rabbits 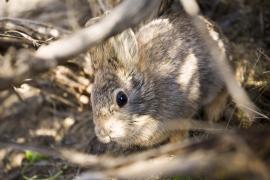 It's not exactly like the cartoons. Pygmy rabbits are smaller than Bugs Bunny and prefer sagebrush over carrots, but the Oregon Zoo, working with the Washington Department of Fish & Wildlife and U.S. Fish and Wildlife Service with help from the Utah Division of Wildlife Resources and the Nevada Department of Wildlife, often has as tough a time as Elmer Fudd does trying to catch them.

"The toughest task is locating active burrows," said David Shepherdson, deputy conservation division manager at the Oregon Zoo. "Even after identifying an active burrow, your chances of catching a rabbit are less than fifty-fifty."

Two of the male pygmy rabbits caught last month were brought back to the zoo's Jonsson Center for Wildlife Conservation for breeding there. All of the Jonsson Center rabbits are expected to be released at Sagebrush Flat later this year.

The pygmy rabbit (Brachylagus idahoensis) is America's smallest native rabbit, weighing less than one pound when fully grown, and is the country's only burrow-digging and sagebrush-climbing rabbit. The shy species is dependent on sagebrush, which makes up the majority of their diet and grows in deep loose soil where the rabbits dig burrows. Over time, the rabbits were edged out of their habitat as sagebrush steppe was converted to agricultural land.

Declines in population prompted Washington to list the Columbia Basin pygmy rabbit as a state-endangered species as early as 1993, but by 2002, only 16 remained in the wild. 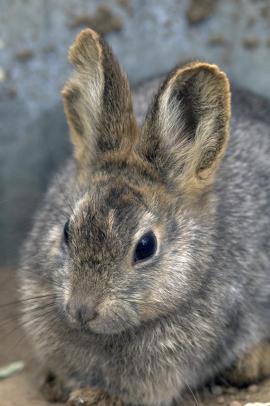 Biologists placed these 16 rabbits into emergency captive-breeding programs at the Oregon Zoo, Washington State University and Northwest Trek Wildlife Park in Washington, and bred them in collaboration with the Washington Department of Fish and Wildlife and U.S. Fish and Wildlife Service. In 2003, the rabbit was listed as federally endangered.

"Columbia Basin pygmy rabbits suffered from inbreeding, a loss of genetic diversity, disease and habitat loss before we began breeding them at the zoo," Shepherdson said. "It's clear that we have to do a better job of protecting animals and their habitats before the situation becomes dire."

Although there are pygmy rabbits in other states, the Columbia Basin pygmy rabbit has been separated from other populations for thousands of years and is genetically distinct.

In preparation for breeding Columbia Basin pygmy rabbits, the Oregon Zoo bred wild pygmy rabbits from Idaho, the first institution in the world to do so.

Now, the zoo and its partners hope both wild and captive-bred rabbits can breed together at Sagebrush Flat.

Previous releases of Columbia Basin pygmy rabbits met with mixed results. In 2011, special wire mesh enclosures were built on the Sagebrush Flat Wildlife Area to help the rabbits transition to their new surroundings and protect them from predators.

Even with these advantages, the Columbia Basin pygmy rabbit still has a long way to go.

"Pygmy rabbits are at the bottom of the food chain, and their habitat has many predators and risks. Even with transitional enclosures, we need to release a lot of rabbits to have an effect." Shepherdson said. "But if we can continue crossbreeding and restoring their habitat, we're hopeful we can give these rabbits a good chance to survive."