2,000 endangered caterpillars reared at Oregon Zoo to be released into wild 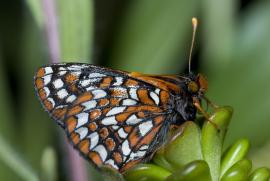 The Oregon Zoo’s butterfly conservation lab is preparing more than 2,000 Taylor’s checkerspot caterpillars for release this week. Zoo staff are moving the larvae from their diapause (insect hibernation) containers into special “wake-up chambers” to ready them for release into restored prairie habitats near Olympia, Wash.

“Our checkerspots have been hibernating for nearly seven months,” keeper Mary Jo Andersen said. “So when they wake up, they’re moving and ready to eat.”

Once abundant in the Northwest, Taylor's checkerspot butterflies (Euphydryas editha taylori) are now listed as an endangered species by Washington state and are a candidate for listing under the federal endangered species act. Today, their range is limited to 12 isolated pockets of prairie in Oregon and Washington. Larvae reared at the zoo are part of the Washington Department of Fish and Wildlife’s ongoing efforts to reestablish the species at sites where they recently disappeared.

“Two hundred years ago, Taylor’s checkerspots were likely widespread throughout the Willamette Valley, the Puget Trough and north onto Vancouver Island,” conservation research associate Karen Lewis said. “But as prairieland was developed for agriculture and urbanization and invasive plant species moved in, ninety-nine percent of prairie habitat has disappeared, along with most of the checkerspots.”

This is the eighth year the zoo has worked with endangered checkerspots and the program appears to be having an effect.

“Field biologists are reporting higher numbers of checkerspot larvae and butterfly sightings in release areas where there were only a small number previously, ” Lewis said. “So we’re optimistic about the project’s continued success.”

The zoo works in partnership with the Washington Department of Fish and Wildlife, Mission Creek Corrections Center for Women and the Xerces Society to develop husbandry protocols, rear checkerspots and release them into the wild.

In addition to the caterpillar release, the zoo and Mission Creek Corrections Center will keep around 500 checkerspot larvae for breeding once they become adult butterflies. The butterflies will be released later this spring while their eggs will be kept at the zoo and become the next generation of caterpillars to continue the conservation process.

The zoo is also involved in conservation efforts featuring another endangered Northwest butterfly, the Oregon silverspot. Over the past 13 years, the zoo has reared and released thousands of silverspots into habitats along the Oregon coast.

Taylor's checkerspot and Oregon silverspot captive-rearing efforts at the zoo are projects of the NW Zoo & Aquarium Alliance, which promotes collaboration on regional conservation efforts among zoos and aquariums in the Pacific Northwest.